Towards the end of 2011, we looked at how teams can get bored and suggested a useful extra phase to the familiar Tuckman Model of group development: forming, storming, norming and performing.

As we start a new year, it seems an opportune moment to introduce another phase: Transforming.

As teams reach maturity, it is increasingly common that they do not simply adjourn at the end of their project.  More frequently, the team re-tasked with a new role.  Some members may move on and new people may join, but just like Murphy’s apocryphal pickaxe*, it is still essentially the same team.

Yet it is different: it has changed.  I hypothesise a new phase: Transforming. 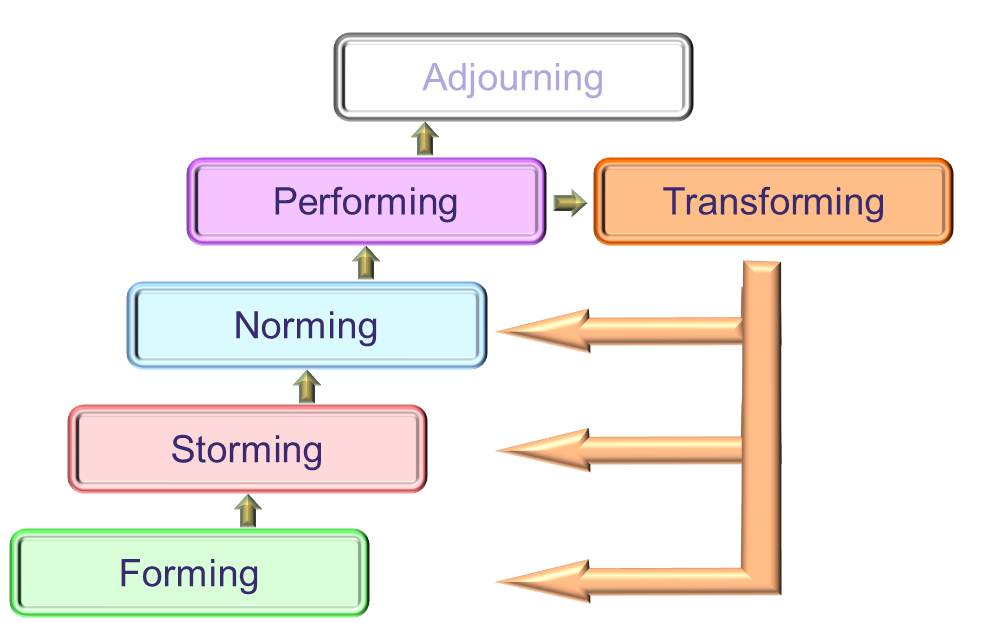 When people leave, new people join, and the team has a new role, it is unlikely to easily remain in the Performing stage.

Perhaps a new member joins and people get their heads down, get on with their work, and figure out how to incorporate Mr or Ms Newbie into the team.  This feels a little like Norming.

Perhaps the new person has a significant role.  People may compete with one another to influence them.  Or maybe, someone significant leaves and two or three members of the team compete for a promotion to fill their place.  These feel a little like Storming.

Perhaps there is a big change in personnel or the role of the team shifts to a completely new project.  Most team members feel pretty uncertain about what’s expected of them and who their new colleagues are.  These feel a lot like Forming.

So Here is the Deal

When a change happens in your team, it is likely to transform.  Detect the extent of the change, and adapt your leadership style to accommodate the new dynamic.  If you continue to manage your team as if it were still in the Performing stage, then you will delay the team’s return to true performing status.

Happy New Year, and many
Prosperous Transformations,
from all of us here at
Management Pocketbooks

‘I’ve had this same pickaxe for 40 years,’ says Murphy; ‘it’s had seven handles and three heads, and I love it.’

The Tuckman model and its variants are described in The Management Models Pocketbook.  You might also like: