Back in the summer of 2011, we did a couple of blogs on the work of Michael Porter – one of the most serious-minded academic thinkers in the realm of corporate strategy.

I think it’s time to take a closer look at these five forces, and maybe question the adequacy of that model too.  So what are Porter’s Five Forces? 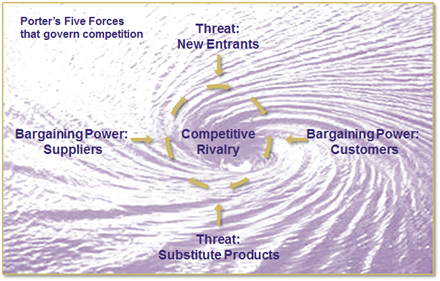 1. The Bargaining Power of Suppliers

If your business is dependent upon the supply of materials, assets, or people, then your suppliers have power over your business – which is increased as the market dominance of your supplier increases.  You need a strategy to keep your suppliers’ interests aligned with yours, by being as important to them as they are to you.  Dependence on a monopoly or near monopoly supplier is a route to doom.  Consider creating alternative supply sources, alternative inputs, or vertical integration to control your own supply source.

2. The Bargaining Power of Customers

It would be great to be a monopoly supplier of a commodity product.  Few are although, if you can differentiate your product sufficiently – for example, as Apple did with the launches of the iPhone and iPad – then you can simulate that position for a while.  Ultimately, the customer is king or queen: without them, you are doomed.

Existing players in your market will be jostling for customers’ attention and preferential deals for suppliers.  For most people, this is where their conception of competition ends.  Porter knew differently . . .

4. The Threat of New Entrants

When Sea and Atari were slugging it out for dominance of the games console market, who would have predicted the arrival of the Sony Playstation?  Answer: anyone familiar with this model.  They would not necessarily have known it would be Sony or that it would be successful, but the threat was there… As it was some years later, when, Atari gone, Microsoft entered the market to challenge Sega and Sony, with the X-Box.

5. The threat of Substitute Products

Somewhere in my stationery cupboard, I have a bottle of Tipp-Ex (probably set solid) and a pack of acetate sheets.  Is there a better supplier of correction fluid or a superior priced transparent paper?  Who knows?  Who cares?  I don’t use either: I print drafts from my PC and re-print when I’ve made corrections, and I project straight from my PC when I need slides.  I doubt many of my clients retain a working overhead projector (OHP).

Are there More Forces?

There you have it in a nutshell: five competitive forces that allow a business to evaluate its competitive strategy.  It is one of the most successful and widely used management models.

The last fifteen years have emphasised the rightful role of regulation as a competitive force or, rather, sometimes the failure of regulation to curb competitive behaviours (Enron, anybody?) I think we would now have to add regulatory forces to any complete analysis.

But I also have to ask, what about internal forces.  How do the social, cultural, political, operational, technological… forces within the business affect strategy.  To me, this is a big gap.

Happily, they can.
But you’ll have to wait until next week’s Pocketblog for that.