There is nothing that is more likely to evoke an aura of ‘science’ than a Greek letter, judiciously applied.  Couple it with a number and our science antennae are twitching excitedly: Six Sigma.

So it is little wonder that Motorola’s 1986 innovation in quality management has become a massive success and an industry in itself.  I am talking, of course, about Six Sigma or, to dress it in its seductively scientific clothes, 6σ.

So, what is Six Sigma?

Six Sigma has variously been described as:

And it is all of these things.  But, in particular, Six Sigma is a structured methodology to drive process improvement.

You get what you pay for…

The easy belief is that quality costs money – ‘you get what you pay for’.  The philosophy of Six Sigma – like other quality methodologies, like TQM (Total Quality Management) – is that the opposite is true; errors cost money: quality saves money.  If you can drive down the error rate, you also drive down costs.

Add to the mystique

To add to the mystique of the scientific-sounding statistical term ‘six sigma’, the developers have introduced a flavour of the orient, by labelling the levels of training Yellow Belt, Green Belt, Black Belt and, wait for it… Master Black Belt.  These echo the westernised grades in martial arts like judo, karate and aikido.

Yellow Belt
Typically one to two weeks’ training to learn to use the basic tools of Six Sigma.

Black Belt
Typically an additional two to four weeks’ training, experience of two or more Six Sigma projects and passing a test, will bring you to black belt status, where you can lead your own project.

Master Black Belt
With lots of experience and lots of training, you can train, mentor and advise black belts.  Eventually, Master black belts progress to a higher state of being where they can reconfigure whole production lines through thought alone.**

What does 6σ actually mean? 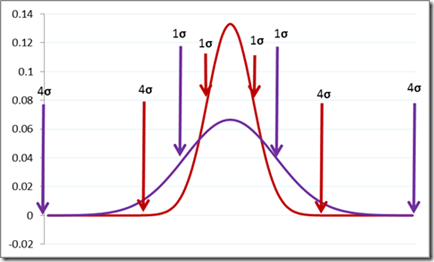 You can see the 1 and 4 standard deviations distances.  You can also see that there will be almost no instances at 6 standard deviations’ distance from the mean.  In fact, six sigma posits 3.4 defects per million instances.  This is pretty close to the ideal of ‘Zero Defects’.

(For technical reasons, this error rate is actually calculated from a 4.5σ deviation from a mean shifted 1.5σ from the desired mean.)

On to the interesting bit

Now you have had a whistle-stop tour of some aspects of Six Sigma, it is time for the most interesting bit: the practical tools that non-experts can apply to making simple improvements from day to day.  Except…

You will have to wait until next week for that, because we’re out of space for this week!

The next articles in the series are:

* No, those aren’t grocers’ apostrophes.
They are there to ease readability.

** This sentence is pure hyperbole.
Only Jedi Master Black Belts can do that! 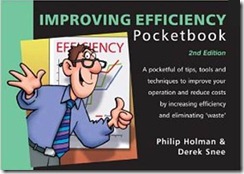