He has an awesome intellect, and holds a PhD (like Karen Stephenson, whom we met recently) not in business, but in another topic: in Ohmae’s case, in Nuclear Engineering.  Like me, he is a physical scientist at heart, but if you think that makes him a pure rationalist, you’d be wrong. 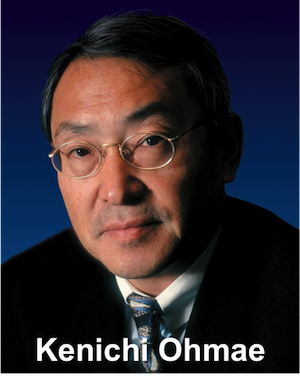 In Ohmae’s best known book, The Mind of the Strategist, he sets out how Japanese business went about creating corporate strategy, arguing that the strategy creation process should not be a rigid, linear process, but instead needs to involve creative and intuitive thinking, flowing from a structured analysis. His book is filled with powerful tools to help us do this analysis, some of which were familiar from earlier works. What was new was the way he set out that Japanese companies go about the process, placing the customer at the centre of their thinking. Central to his approach is ‘The Strategic Triangle’ – or the three C’s. 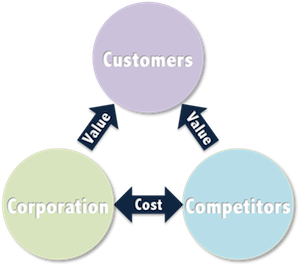 Kenichi Ohmae was born on the southernmost Japanese island of Kyushu, in 1943.  He studied chemistry as an undergraduate and then nuclear physics at the Tokyo Institute of Technology, before moving to US to earn his doctorate in nuclear engineering at MIT. His first job was a brief one, at Hitachi, but he quickly found his natural milieu, moving two years later to McKinsey & Company in 1972.  He stayed there for 23 years before stepping down to run for public office as Governor of Tokyo. When he was beaten, he moved into academic life and private consulting. His first book, The Mind of the Strategist, was written in 1975 and his other particularly influential book, on globalisation, The Borderless World, came out in 1990. In total, he has written eight books and contributed to others.

Central to Ohmae’s early work is the strategic triangle of corporation, customers, and competition, and his injunction that we place customer focus at the heart of our strategic thinking. Another key point of his, against which many global corporations have swung in recent years, is the criticality of strategic business units. These are quasi autonomous businesses within a large corporation, capable of serving a discrete customer set with products or services that they need. He argued that this is where the corporation is closest to its customers, so it must give these SBUs freedom to operate as they see fit, in service of their customers. The role of the strategist in this is to match the capabilities of the corporation to the needs of the market. Sadly many of the global corporations I work with now see fit to centralise so many functional decisions that SBUs are no longer able to serve their customers as they would like.

Ohmae’s later work, starting with The Borderless World, focused on the effects of globalisation. He advocates two more C’s: Country (nation states) and Currency (the impact of exchange rates and volatility). These become ever-more important considerations in a corporation’s strategy. It is the attempts to leaven the risks and harness the opportunities of these factors that have lead major corporations to subordinate Strategic Business Units to global-level corporate strategies and business planning.