Meredith Belbin is the leading management thinker in developing our ideas about team roles. His research in the 1970s led him to develop the team-role theory that bears his name. This is now a widely used model, supported by a range of commercially available tools distrbuted and supported by the company he founded in 1988 with his wife, Eunice, and his son, Nigel Belbin. 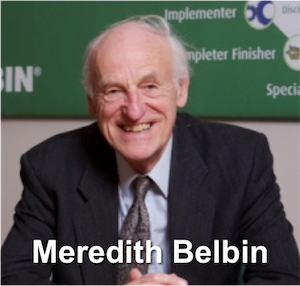 Meredith Belbin was born in 1926, and grew up in the English Home Counties during the Second World War. After the war, he went to Cambridge to read classics, but transferred to study psychology, where he met his wife, and went on to gain a PhD. His early work was focused on the needs of older workers, but it was when working with his wife at the Industrial training research Unit (ITRU) that he did his breakthrough research.

He was invited to conduct research at the Administrative Staff College (now Henley Management College) and set up a long-running programme of studies with co-researchers, Bill Hartston, Jeanne Fisher, and Roger Mottram. Year after year, they observed teams of managers competing in business games, recording the way team members contributed and cross referencing this with results of numerous psychometric tests.

Belbin documented the conclusions of this research in his now classic 1981 book, Management Teams: Why they Succeed and Fail, which is currently in its third edition. Since then, he has written a number of books, perhaps the most successful of which has been Team Roles at Work.

What Belbin was able to do, was merge the many different psychological and aptitude factors into eight (later extended to nine) archetypes*, which he has carefully noted are not pure personality types. This means that one individual can fulfill more than one of the team roles and, indeed, this is often desirable. Belbin found that the most successful teams had a balance of all of the team roles, but also that teams of around five members are optimal.

Belbin’s later research and writings have been more anthropological and philosophical in nature and have failed to gain much traction. They seem neither as grounded in empirical research as team roles, nor as practical in their application. However, Belbin’s place as a leading thinker is assured. Whilst other models of team roles have emerged – most notably that of Charles Margerison and Dick McCann – Belbin’s core ideas have stood the test of time, and the nine team roles he identified and the tools his company supplies remain the most widely used by management teams.

* ‘archetypes’ is my word, not his – and I do not intend it to suggest any particular affinity between Belbin’s work and Jungian archetypes. In fact, the primary psychometric instrument Belbin used in his research was Cattell’s 16PF.