Orpah Winfrey (not a mis-spelling) was born into poverty and hardship in 1954 and rose to become both a celebrity phenomenon and a business magnate. Along the way she made many astute decisions. One of the first was to change her name, recognising that if too many people mis-pronounced Orpah as Oprah, then she may as well go with the flow. Part of her skill has been an adept assessment of the direction of flow. 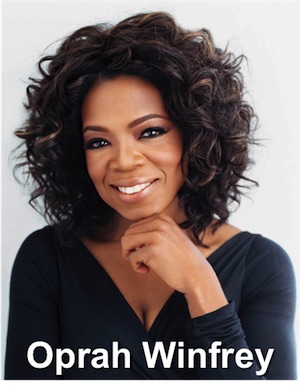 There is far more biographical detail available about Oprah Winfrey than most other of our management thinkers, so let’s stick to summarising a few of the facts most relevant to our theme, and leave the more vibrant details to other sources. Many of them have been revealed on her TV shows and in her books – others have emerged through unauthorised tabloid revelations.

Winfrey’s early years in rural Mississippi with her grandmother, urban Wisconsin with her mother, and Tennessee. She experienced much hardship and poverty, including serious abuse, teenage pregnancy, and bereavement.

It was while living with her father for a second time that she started to succeed at school, enter Tennessee State University and land a news job on the local radio station, WVOL in Nashville. This led to a news anchor role at the local TV station, WTVF-TV (then WLAC-TV). She was a television natural and had evident star quality. In 1976, she moved to Baltimore as a news co-anchor at WJZ-TV, which didn’t work out well for her, but the senior executive at the station suggested she co-host a chat show instead.

Although she was reluctant at first, and both she and the station considered it a risk, this was her defining moment: the audience loved her and the show’s ratings rose rapidly. In 1984, she took on a new role as host of WLS-TV’s prime morning talk show, AM Chicago, broadcast head-to-head with the top-rated talk-show, hosted by Phil Donahue. Within a month, it was Winfrey who rated number one.

In 1985, she co-starred in Steven Spielberg’s multi-Oscar-nominated movie, The Color Purple, winning an Oscar nomination herself as best supporting actress. The following year she launched her nationally syndicated show, The Oprah Winfrey Show. Her style of being open and honest with her emotions made her a national hit with many millions of viewers.

Two years later, her astute business sense became evident, as she bought the rights to her own show, set up a production company (Harpo – Oprah backwards), and build a $20m studio in Chicago. After Mary Pickford and Lucille Ball, Winfrey was the third woman to own a major US studio. Hwer business life continued and continues to be a huge success, making her a multi-billionaire.

What Business Lessons can we Learn from Oprah Winfrey?

It is easy to think of Winfrey as a media celebrity: her TV chat show is the foundation of her business empire and she has 22 credits as an actress. But she is producer on half as many again films and TV shows and she is owner of a huge portfolio of media assets including TV networks, production companies, and magazines.

I think there are three principal lessons that any business person or manager can learn from her:

In 2003, Michael Moore wrote that Oprah should run for US President. That would be a shift, and it would take grit too. Will she do it?

Hear Oprah Winfrey in her own words

For more about her career and her advice to listen to your instincts, here is an interview (c.65 min) she gave at Stanford’s Business School in 2014.