C K Prahalad was one of the giants among academics thinking about corporate strategy at the end of the twentieth century and into the twenty-first. It may be that his revolutionary ideas form a core of real global transformation in the years to come. Prahalad was instrumental in transforming our understanding of corporate strategy twice, during a sadly short academic career of only 35 years. 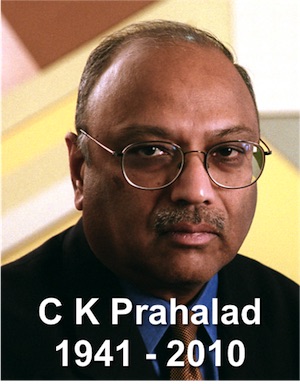 Coimbatore Krishnarao Prahalad was born in 1941 and grew up in Coimbatore, in the Southern Indian state of Tamil Nadu. He was an exceptional academic student, graduating high school three years early and gaining a BSc in Physics from Chenai’s Loyola College in 1960, at the age of 19. He joined Union Carbide, first as an intern and later was promoted to be its youngest manager. But he left in 1964, to join the first MBA class at the Indian Institute of Management (IIM), earning his MBA in 1966.

From there, he joined a manufacturing firm, Indian Pistons, which offered the stability to marry and start his family. But the call of the academy continued and in 1973, with his family, he went to the US and started his DBA research at Harvard – while his wife, Gayatri, started her master’s degree in education.

After Harvard, he took up a teaching post at IIM, and gradually acquired others, coming to base himself at the University of Michigan. There, he was recognised as the outstanding teacher in the business school. There too, he met doctoral student Gary Hamel. Together they built a combative rapport that generated the highly influential 1990 Harvard Business Review paper, ‘The Core Competence of the Corporation’.

They then developed these ideas into the best-selling book, ‘Competing for the Future‘. They continued to work together, and Prahalad also worked with other collaborators, perhaps most notably with marketing academic Venkat Ramaswami to produce ‘The Future of Competition: Co-Creating Unique Value With Customers‘, which looked at how some of the emerging big players on the internet were co-opting their customers to generate value for themselves and their peers.

Prahalad’s biggest idea was one that he worked on alone and only time will tell how successful it really is. Wondering how so many billions of people remain in poverty despite the apparent success of our best management and technological developments, he argued that the bottom 5 billion people by wealth still account for a potential market of over $10 trillion. He figured that addressing that market could equally benefit those people and the corporations that do so. His ideas and research were published in 2004, in ‘The Fortune at the Bottom of the Pyramid: Eradicating Poverty Through Profits‘.

In throwing out existing data and process led theories of strategy formation, Prahalad and Hamel developed a simple model of how corporations can achieve competitive advantage. This simplification of their ideas is mine and any errors of interpretation I have introduced are mine too.

This is where corporate leaders visualise new markets and how to exploit them ahead of their competitors. They argued that to do this effectively, executives have to:

Hamel and Prahalad had little time for small scale intrapreneurial innovation. They advocated big, revolutionary changes in markets that would allow a corporation to dominate, such as:

To do this, they argue that an organisation must understand its ‘core competencies’ – the abilities it has to create and innovate by bringing together its skills, technologies, assets, and relationships in ways that dominate multiple markets by offering big benefits to customers in a way that competitors find hard to duplicate.

The threat of relying on core competencies, however, is two-fold. Firstly, it may cause market and product diversification into arenas where the corporation has insufficient depth of understanding or presence to be effective. This can lead to large failures. Alternatively, over-focus on core competency leads to a rigidity of thinking that is reinforced by a sense of comfortableness, and leads to a sense of complacency. Such circumstances lead to being replaced in your core markets by insurgent competitors.

Hamel and Prahalad’s focus on core competencies leads them to focus what they say about implementation on building up core competencies and their supporting infrastructures of assets, resources and technologies.

You do this through what they call ‘Expeditionary Marketing’ to understand how the parameters of feature-sets, performance, and pricing need to be balanced to penetrate, consolidate and dominate your market.

The Bottom of the Pyramid

How do you build a market among people who are too poor to buy your products? By re-thinking entirely how you deliver your products and the pricing model you use. Prahalad was able to find and research numerous case studies that show how corporations can do this successfully, to create:

Hear Prahalad speaking about this and more…