Born in poverty, Andrew Carnegie became the richest man in America and then gave away most of his wealth. His business success story embodies eternal truths of business success, and modern innovation too. 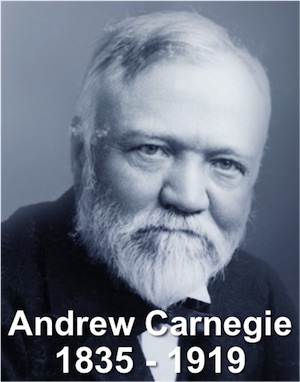 Andrew Carnegie was born in Dunfermline in Scotland, in 1835. The family struggled to make ends meet and, in 1848, emigrated to the United States, settling in Allegheny, Pennsylvania, just outside Pittsburgh.

Very soon, Carnegie started earning money, first in 12-hour shifts at the local cotton mill, then as a Telegraph boy, and then at the Pennsylvania Railroad. Starting as a secretary to the Superintendent,Thomas Scott, Carnegie thrived. He was to maintain his association with Scott for many years and it was the springboard for much of his later success.

Scott both promoted Carnegie as a Railway executive and introduced him to the opportunities to invest in stocks. Today, many of Carnegie’s early investments would be considered insider trading, but then, it was simply exploiting the knowledge and connections that he and Scott had created. This investment gave him the capital to start his own businesses.

During the Civil War (1861-65), Scott and Carnegie continued to thrive – largely because the railroads needed to move vast quantities of raw materials, men, and munitions. At this time, Carnegie also invested in the growing Pennsylvania oil industry.

Rising to Superintendent of the Pennsylvania Railroad, Carnegie forged the connections that would make him vast wealth, when he moved into the Steel Industry. After the war, he set up a number of iron works and formed The Keystone Bridge Works and the Union Ironworks, in Pittsburgh. His connections in the rail industry gave him a ready market.

Iron bridges were notorious for failing, but on a trip back to Great Britain, he met Sir Henry Bessemer, who had developed an industrial process for converting iron into high grade steel. Carnegie brought the Bessemer Process back to the US in 1870. This innovation gave him the ability to manufacture vast amounts of high grade, but low cost steel, which he sold to the railways for bridges and rails. It is said that Carnegie girders built the skylines of the northern states.

He also innovated by creating what we now call ‘vertical integration’. He bought up the ability to manufacture the coke for his Bessemer Furnaces, made the steel, and used it to build and sell finished products from bridges to steamships. At the same time, he was also creating ‘horizontal integration’ – steadily bringing together various businesses into one centralized corporation, the Carnegie Steel Company. These two developments led to huge efficiencies.

Not all efficiencies were equally good. Carnegie fell out with long term business associate, Henry Frick, when Frick – going against Carnegie’s instructions – employed armed Pinkerton agents to support strike breakers in 1892. The ensuing loss of life was a stain on Carnegie’s reputation as an ethical businessmen and, whilst he felt he had to publicly support Frick, led to him buying out Frick’s shares in the business.

In the 1890s,  James Pierpoint (JP) Morgan’s steel holdings were growing rapidly. Carnegie saw the wealthy banker as his primary competitor. As the twentieth century began, Carnegie weighed his options: compete or not? Wanting to retire, he opted not to compete but to offer to sell to Morgan. Accounts differ as to whether Carnegie wrote down the sale price on a piece of paper and passed it to Morgan or whether he asked Morgan to write a price on a piece of paper and return it to him. Either way, the resulting transaction of nearly $500 million (equivalent now to over $13 billion) made him the richest man in America (and if we equalize the value by spending power, by far the richest ever).

Early on, Carnegie had talked of giving away surplus income to benevolent purposes. Now he set about giving away vast amounts of his capital. The list of organisations that received massive endowments seems almost limitless. Of all, his most famous approach was to endow the creation of many, many libraries. As a boy, he educated himself, reading from the personal library of Colonel James Anderson, who opened it to working boys each Saturday night.

Now he was able to create public libraries throughout the United States, Britain, Canada and other English-speaking countries. He opened the first Carnegie library in 1883, in Dunfermline. He would build and equip libraries on the condition that the local authority matched his commitment by providing the land and funding its ongoing operation and maintenance.

He led a trend, in the early twentieth century, of huge works of public philanthropy. The idea of giving away most of a vast wealth was reinvigorated recently. Bill Gates, Warren Buffett, and more recently Mark Zuckerberg, today’s giants of personal wealth, have all made commitments to give away much of their wealth, perhaps mindful that Carnegie once said that ‘the man who dies rich dies disgraced’.