At its best, television can inspire and educate.  It can also make us think.  Some of us mourn the loss of House from free to air TV in the UK – ho hum: there are always DVDs.

So what can you learn from House?  Masses, it seems and there is even a book ‘House and Philosophy’ to guide you.  It is part of the Blackwell philosophy and pop culture series. 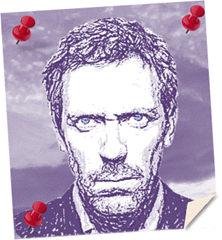 For those who didn’t catch the US drama series, House is an ornery, arrogant, self-centred and devious doctor who specialises in diagnosing and treating the most mysterious of cases that come into his hospital.

He is played by Hugh Laurie, about whom one American writer said: ‘does a terrific job with his British accent on Jeeves and Wooster.’

House appears not to care about his patients – his concern is for solving the case.  Whilst there are episodes with exceptions to this rule, a distinct illustration of this is when he risks brain damage to a boy in order to find the evidence that will allow him to save the boy’s life.  When challenged about this, he replies to the effect that he does not worry about things he cannot do anything about.

For most of us, however, the consequences of our decisions weigh heavily.  Regardless of our intention, if the outcome is bad, we have to live with the guilt.  This is known to philosophers as ‘agent regret’.  For House, the ends entirely justify the means, but it works both ways.

If House makes a wrong decision – or indeed one of his subordinates does – it is not enough, for him, to hide behind ‘we followed procedure’.  In judging responsibility, it is again the outcome that matters.

When we think about decision-making in organisations, we talk about a ‘good decision’ as one that can be defended.  It requires three things:

But a good decision is not the same as the right decision.  We require good decisions, because they appear to maximise our chances of getting it right.  But we also require them, because we cannot require that all decisions are right.

How much do your decisions matter?

Agent Regret seems to me to be a fancy philosophers’ phrase for conscience.  Knowing about it can have two effects:

Of course, when House takes the latter course, it usually works out.  Real life is rarely as obliging.  But even so, what is there to lose if you make one last check? 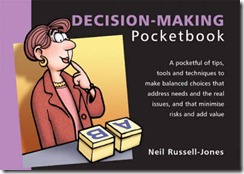 The Decision Making Pocketbook will give you a sound process and a range of useful tools to help you make your decisions.  They won’t prevent Agent Regret if you get it wrong, but they will limit your regret to the consequences, rather than ignorance or negligence.

You may also enjoy:

One thought on “Learning Decision Making from Dr House”