Have you ever noticed that things seem to cluster in your life?  There seems to be a ‘time’ for certain things: one minute they are in the deep background, and the next, they emerge and keep assailing your senses.

So it has been these last few weeks for me.  Nearly a month ago, I attended an interesting talk and wrote a blog about Generation X and Generation Y, and then found out about a unified theory of all of history, based on generations.

I returned to that theme a week later, to speculate how Generation Y (born between 1980 and 2000) would behave as managers in the workplace.  But the theme could not leave me alone.

What comes after Generation Y

Unsurprisingly, there is no consensus on either date boundaries or naming for the generations born most recently.  We simply do not have the perspective to get it clear in our minds.  Beyond Gen Y, the terms ‘Generation Z’ (how unimaginative) and ‘Millennials’ (how literal) are popular.

At the original talk I heard, Professor Averil Macdonald, speculated that the generations seem to be getting shorter to keep pace with more rapidly changing culture.  Ever the sceptic, I suggested that maybe it is just an over-eagerness among social scientists to attach labels, write papers, and claim recognition.

Consequently, I determined to ignore ‘the children’ in my blogs – they won’t beat work for a good few years.  Until, that is… 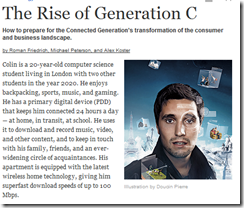 One of the most useful websites for anyone interested in business thinking is that of Booz & Company’s business thinking magazine, ‘strategy+business’.  I scan it regularly and often read the papers there.  Many are as good as the premium priced Harvard Business Review, and there is only one comparable source I have found (my secret for the moment – I need to stay a half step ahead of you!)

So, in the spirit of my opening paragraph, I was intrigued by the title of the newest (a week or so ago) article they posted: ‘The Rise of Generation C’.  I downloaded my copy and filed it under ‘no, really, read this one… don’t just leave it in a pile with all the others you plan to read one day, someday’. Do you have one of those piles, by the way?

Who are Generation C?

Put simply, Generation C are the connected, communicating, computerised, clicking-all-the-time people who grew up with a hand held in their cot.  My two-year-old can use my iPhone.  The authors (Roman Friedrich, Michael Peterson, and Alex Koster) assert they are born from 1990 – creating a ten year gap with the clearly defined Gen X and a ten year overlap with Gen Y as many define it.  So the Generational timings are possibly adrift.

I am unsure whether I agree with their start point.  Early 1990s babies only really started to interact online ubiquitously in their early teens, so whilst comfortable with the technology, it may not be the huge jump in attitude that 2000’s children will experience from having hand-held devices as part of their infant upbringing.

But their key arguments I do buy into.

I also infer something seemingly paradoxical.  In their article on Gen C, the authors point out that Gen C prefers text messaging and IM (Instant Messaging) to speaking – phones will be (to go back to the Greek root) no longer phones.  This seems to me to counter a prevailing view about the death of the written word among the young.

My publisher would also have strong views on what this means to her business model – more in future blogs – and linguists may see this as another force for the dominance of a few major languages over the many languages with fewer users.

As an aside, have the older readers among you noticed that ‘dialling a number’ and even ‘ringing someone’ are now purely metaphors.  One day, there will be an English GCSE question, analysing a 1960s text, asking ‘why does the author use the phrase “she dialled the police” when Mary found her flat had been burgled?’ I feel old.

Reading ‘The Rise of Generation C’, I was struck by two feelings:

Perhaps because I have been on the cusp of most changes in our lives, I have never felt the full impact that some have.  I am on the boundary of the Baby Boomer Generation and Gen X, I am equally at home with imperial and metric measures (and recall my father reluctantly labelling up 13mm plywood in 8’ x 4’ sheets), I mastered pounds, shillings and pence but could instantly see the benefits of decimal, and I felt behind on the internet generation in 1996 so bought my PC to catch up.

I expect to ride out this change, iPhone in hand, but I expect that many who go to collect their first pension will look back from 2020 and say ‘Toto, I’ve a feeling we’re not in Kansas any more.’ The Gen C nearby will click a button on their mobile device, and it will say:

‘Toto, I’ve a feeling we’re not in Kansas any more.’  – quote from the motion picture ‘The Wizard of Oz’ said by Dorothy, played by Judy Garland, film released in 1939.

You know what, we’re a little way out of the Management Pocketbooks ‘zone’ here.  However, the sister publications are Teachers’ Pocketbooks, and they are for the people teaching Gen C.

Check out their new Learning and the Brain Pocketbook, with Gen C on the cover, and read their fabulous blog.