Well, the title is not a controversial statement and I am certain Dr Goleman would be the first to agree with it.  So why is it that almost all business-oriented articulations of Emotional Intelligence (EI) are founded on one or another of his models? 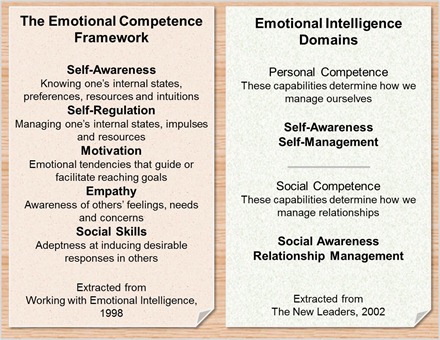 The simple answer, I suspect, is that Goleman brought the concept to the public’s awareness with his first, 5 million selling, book, and then made it an equally popular topic for business people and managers with his follow-up ‘Working with Emotional Intelligence’.

Each of these books and his subsequent publications are written with a strong journalistic flair that makes them compellingly readable and highly accessible to non-psychologists.  This is clearly one reason.  But I think there is another, even stronger reason. 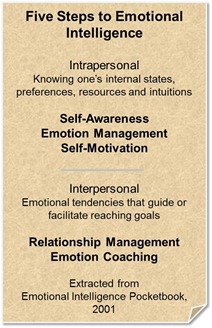 There is a wealth of alternative models and mash-ups, including the one in The Emotional Intelligence Pocketbook.  This one looks superficially like the earlier Goleman model, but combines the two social competences and introduces a new capability of ‘Emotion Coaching’. 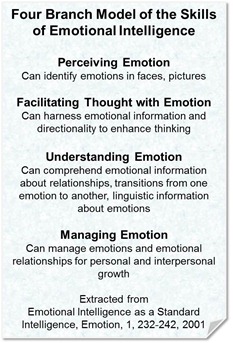 Goleman himself acknowledges the seminal influence of Peter Salovey, whose joint paper written with John Mayer was his first introduction to the topic in 1990.  Salovey and Mayer’s thinking has evolved, and their current model (1997) sets out four branches of EI.

The difference between this model and Goleman’s arises from the authors’ mission to demonstrate that EI is a true intelligence.  This gives rise to four mental abilities, or aptitudes, that we can develop and harness to practical purposes.

You can view Goleman’s four or five competencies as practical skill sets that we can develop and put immediately to use.  Margaret Chapman takes this further with her entirely new skill set of Emotion Coaching.

It is the more practical nature of Goleman’s models that, I suspect, has made them far more popular.

A Combined Model of Emotional Intelligence

Goleman’s model clearly distinguishes the Intra-personal and the inter-personal domains (a distinction also drawn by Howard Gardner, founder of the theory of Multiple Intelligences).  Mayer and Salovey’s model resolutely does not.  So I can’t help wondering what happens if we impose this distinction upon their model.

I hasten to note that they are engaged in rigorous academic research and this new construct is little more than a whim of my own.  But here goes… 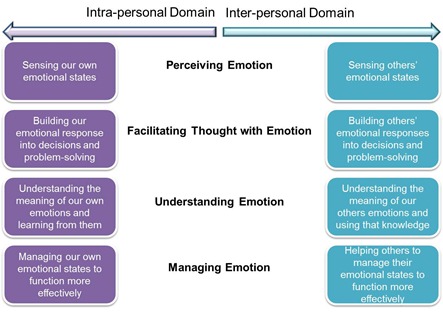 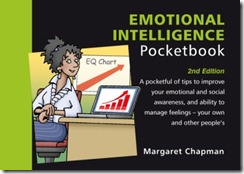 The Emotional Intelligence Pocketbook contains many fine resources.  You may also like: