There is a well known model of technology adoption that suggests a small number of us (the ‘Innovators’) adopt a new technology as soon as it is available.  Then enthusiasts called ‘Early Adopters’ get a hold of it and create a real buzz.  This leads to the ‘Early Majority adopting, followed by the ‘Late Majority’.  Finally, when there is no doubt left that this is the new prevailing orthodoxy, the ‘Laggards’ will catch up. 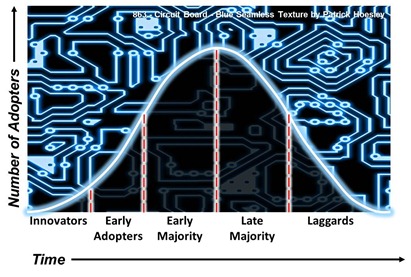 This model has been around since the late 1950s, when it was developed by Joe M. Bohlen, George M. Beal and Everett M. Rogers at Iowa State University, building on earlier research conducted there by Neal C. Gross and Bryce Ryan.  The original authors were interested in how farmers adopted new seed stock.  It was then generalised to all technologies by Everett M Rogers in his book, ‘Diffusion of Innovations’, in which he examined different technologies and different cultures.

This model is widely used, but I recently came upon a newer model that captures something of the flavour of the world of more rapid change we live in.

The Gartner Group specialises in analysing technology and technology businesses to provide business intelligence.  They have developed a number of proprietary models, like the Magic Quadrant and the Hype Cycle.  Let’s have a look at the latter. 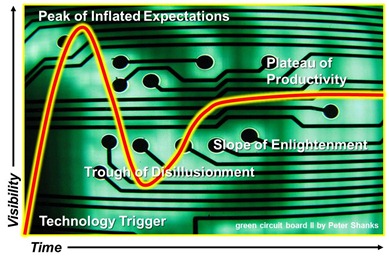 This suggests that new technology goes through five stages.

Some new breakthrough offers the promise of something good.  The press get hold of it (in any number of ways) and they – or its inventors – start to promote it towards…

It is now the next BIG thing that will change the world.  Some commentators get carried away and some otherwise rational (or maybe prescient) investors place big bets.  Then reality kicks in…

Early promise is unfulfilled or things just take longer than anticipated.  Research and development is like that.

Of course, the technology may well fall off the curve here and never realise the promise of the hype that once surrounded it.  If it doesn’t, it moves on to…

Now development is bearing fruit and interest is building again – but now at a more realistic pace.  Products are becoming available at mainstream prices and Early Adopters are jumping onto the Technology Adoption curve.  The rest of us start to follow as the product reaches…

With mainstream adoption comes a realistic assessment of the products true potential and level of impact on the world.  Has it lived up to the hype?  Few ever do.

See a lot of familiar products charted onto this curve by Gartner, here.