When I was a physics postgrad, all of the best electronic equipment in our lab was made by one company; the oscilloscope, signal generator, analog-digital converter and the plotter. They were made by Hewlett Packard.. My professor had a deep admiration for the quality of their engineering. Every since, I have had an almost blind faith in the quality of HP printers. Hewlett Packard was founded by two college friends, Bill Hewlett and Dave Packard. It was Packard who ran the company for many years, and his management style is the epitome of Theory Y. 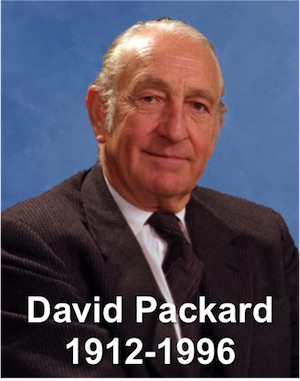 David Packard was born in 1912 and grew up in Colorado. He attended Stanford University, graduating in electrical engineering in 1934. There, he met two people who were to dominate his life: his wife to be, Lucile, and Bill Hewlett.

After a spell at General Electric and further study at MIT, Packard and Hewlett formed a partnership in 1938, starting the Hewlett Packard business with just $538 of capital, in a garage in Palo Alto, in what is now known as Silicon Valley. HP, as it is known, quickly became a successful business, becoming one of the world’s most admired companies. This is, in large part, due to the exemplary management style of its founders and of Dave Packard in particular.

In 1957, Packard wrote ‘The HP Way” a statement of the values and management principles of their business. This later (1995) evolved into the book, The HP Way, How Bill Hewlett and I Built our Company.

In 1969, Packard temporarily left the company to take up a political post (Deputy Secretary of Defense) in the Nixon administration. There, he became involved in resource management, setting up the Defense Systems Management College and in amending the 1878 Posse Comitatus Act to extend presidential powers to involve military personnel in certain civilian matters.

He returned to the company in 1972 and remained Chairman, and then Chairman Emeritus, until his death in 1996. He left around 4$ billion to the charitable foundation that he and his wife founded, and which is now administered by his son and three daughters.

Not only was Dave Packard a model of humanistic management, but he is closely associated with his own particular style of management…

Management by Wandering About (MBWA)

Management by Wandering (or Walking) About is exactly what it sounds like. He and Hewlett would wander about the business, engaging staff in conversation, listening to them, showing respect, and empowering them to do their best work. They valued both the informality and the egalitarianism (in a time when the senior management of most US corporations ate apart, in a management dining room).  This seemed to come naturally to them both and is not, perhaps, too surprising, as they were both, like many of their staff, skilled and enthusiastic electronics engineers. You can get a good sense of the level of respect that Packard had for his people from 11  rules that Dave Packard presented at HP’s second annual management conference, in 1958 – a year after he wrote the first version of The HP Way. We cold all do a lot worse than to try and live by these rules, which you can see on the HP website.

Another important principle that HP lived by was the need for organisational agility. They maintained this by breaking the company up into smaller divisions whenever any of them grew too large (1,500 people or so). By keeping a business made of small units, each one could stay focused and  its leaders could fully understand what was going on and, crucially for a cautious business leader like Packard, stay aware of the risks it was incurring.

In 1972, despite early scepticism, HP introduced its first pocket calculator, which led to another round of significant growth and its subsequent investment in the computing business. I still use my HP12C financial calculator, which is so admired that there are numerous apps cloning its looks and functions on my iPhone.

But Packard’s innovative sense could also be applied compassionately. In 1970, the US economy fell into recession and many of HP’s competitors made massive lay-offs. HP did not. Instead, it agreed with all workers and management to cut wages by 10% in return for them working only 9 days out of ten. This meant that no-one lost their job and, to the company’s advantage, it also meant that there were no costs of redundancy and , when the economy recovered, they could get back to full productivity without the costs, delays and pain of re-hiring.

The final lesson to learn from Packard is his over-riding commitment to the quality of the firm’s products. This was what had so enchanted my professor and won his loyalty. In one memo to HP staff (1961), Packard wrote:

‘Our main task is to design, develop and manufacture the finest [electronic equipment] for the advancement of science and the welfare of humanity.’

That is an ideal worthy of our respect, as well as the loyalty of one eminent physics professor.