The commercial world is unpredictable, with societies shifting, technology evolving and competitors bringing new products and services to market rapidly. The old world of a long-term competitive advantage is pretty much over. Now we see short periods of a new product securing a competitive advantage, before it is supplanted by the next.This is the thesis of Rita Gunther McGrath, a Columbia Business School professor, who has also been developing tools and methodologies for planning and strategising in this shifting landscape. 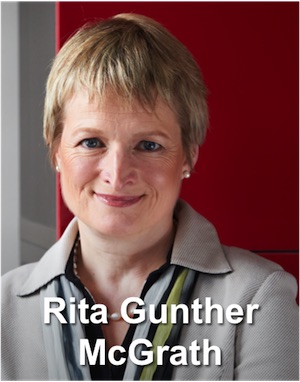 Rita Gunther McGrath was born in 1959 and grew up in New Haven, Connecticut. She earned a BA in Political Science and History at Barnard College in 1981 and a Masters in Public Administration from Columbia University in 1982. She then spent eight years in senior roles at The City of New York, before entering a PhD programme at The Wharton School, University of Pennsylvania. Here she collaborated extensively with Ian MacMillan, with whom she co-wrote three books.

Completing her PhD in 1993, she joined the faculty of Columbia University Business School, but continued her collaboration with MacMillan.

McGrath came to the business world’s attention with a Harvard Business Review article (co-written with MacMillan) that has become one of the magazine’s best-selling reprints. In ‘Discovery-Driven Planning’ the authors note the obvious: that strategic ventures are risky. For a business to launch a substantively new product or service, it must set off into the unknown. Unlike other, less uncertain endeavours, therefore, it is not possible to define a full plan, because the web of assumptions on which you need to base that plan would be too tenuous.

Instead, the authors suggest a process by which the plan evolves as new evidence and data are uncovered and assumptions can be tested and either validated or replaced. This is ‘discovery-driven planning’. To manage risk, resources are allocated incrementally, at milestones where further certainty is locked in.

The methodology the authors spell out includes five ‘disciplines’ and four inter-connected tools, or documents.

As your venture unfolds and you uncover new data, update each of the documents.

McGrath’s latest book – and her first written on her own – is End of Competitive Advantage: How to Keep Your Strategy Moving as Fast as Your Business (2013). In this book, she demonstrates the nature of contemporary competitive advantage as a transient state. But the source of that competitive advantage came out clearly from her research. In surveying 4,793 publicly traded companies (every company with a market capitalization of at least $1 billion), she looked for those that had grown their net income by 5% or more in every year from 2000 to 2009. There were only ten.

When she compared each of these ten to their top three competitors, she found a clear differentiator. They were ‘pursuing strategies with a long term perspective on where they wanted to go, but also with the recognition that whatever they were doing today wasn’t going to drive their future growth’. They were not following any sustainable competitive advantages; but rather, temporary ones.

McGrath advocates a simple cycle of:

Campus London is a Google event for UK Entrepreneurs. Here is McGrath speaking about The End of Competitive Advantage in 2013.