Frederick Herzberg was a clinical psychologist who saw a gap in the research on workplace psychology and filled it with his convictions about what gives people a sense of wellbeing. This places him amongst other great humanistic psychologists, from Maslow to McGregor. His work was widely influential and his keystone Harvard Business Review article, ‘One More Time: How do you motivate employees?’ remains one of the most widely read of that publication’s reprints. 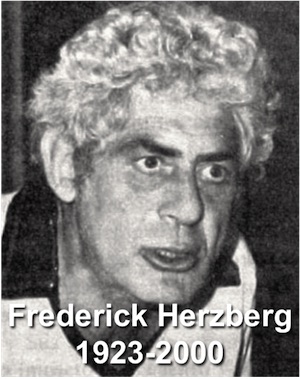 Frederick Herzberg was born in Massachusetts in 1923 and grew up in New York, where he attended the City College of New York, initially studying history. Incidentally, Maslow also attended City College. Although he loved history, he found the way it was taught too impersonal and overly-focused on events, so he transferred to psychology. But before he completed his course, he enlisted in the US Army, where he served with distinction as an infantry sergeant. He was among the liberators of the Dachau concentration camp which must have affected him profoundly, not least because he was a Jew whose family had come to the US as emigrants from Lithuania.

After the war, he returned to New York to complete his degree and went on to earn a masters degree and a PhD at the University of Pittsburg. In the mid-1950s, Herzberg worked at the US Public Health Service where he started to become interested in workplace psychology. After surveying all of the existing literature and finding it wanting, he conducted his own research, interviewing over 200 engineers. This work led, in 1959, to his first book, with Bernard Mausner and Barbara B. Snyderman, Motivation to Work. He followed this with his 1966 book, Work and the Nature of Man, in which he extends the same ideas in a more philosophical direction, adopting the metaphor of the characters Adam and Abraham from the Bible.

Herzberg’s earlier academic work was done at Case Western Reserve University, from where he moved to the University of Utah in 1972. He remained there up to his retirement. He died in January 2000.

Our earlier post, What Motivates your Team Members?, summarises Herzberg’s Hygeine and Motivation theory. He discovered that the things that leave us dissatisfied at work are different from those which satisfy us. Fixing the dissatisfiers (or ‘hygiene factors’) will only stop us being grumpy. Other things motivate us positively and Herzberg argued that employers should stop trying to use the granting and withholding of hygiene factors (which he colourfully described in his HBR article as giving employees a Kick in the Ass – KITA) and start working on the positive, aspirational motivators that enrich our lives. He was an early advocate of engaging employees and bringing the best out of them.

Indeed, Herzberg catalogued what he saw as essential in bringing out creativity and innovation from your team:

Ultimately, Herzberg had an individualistic view of workplace success, ascribing more significance to personal talents and attitudes than to team efforts. He drew a balance between the attitudes and talents that eschewed simplistic egalitarianism, in favour of offering primacy to individuals with more relevant knowledge and expertise. But he also wanted to create a balance between a focus on data and fact on the one hand, with passion and experience on the other.

He taught us, as much or more than anyone else, that the simple approach of carrot and stick brings little more than ‘okay’ performance out of people. It is virtuous behaviours that enrich a workplace, which create great results.