Anita Roddick transformed cosmetics retailing in the UK with one simple idea: it was time for overtly ethical retailing. Her legacy was one of political, social, medical and environmental campaigning. 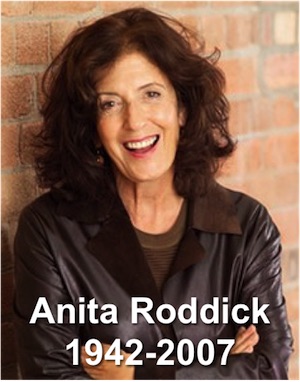 Anita Perilli was born and grew up on the South Coast of England in the Sussex town of Littlehampton.After college, she did many jobs, including spells with The International Herald Tribune and the United Nations. She also travelled the world, including a visit to South Africa, from where she was deported under the then Apartheid race laws. When she returned to Littlehampton, she married Gordon Roddick and they started a family. They also opened a small hotel and a restaurant. When her husband decided to embark on a travel adventure, Roddick used the hotel to fund her first cosmetics shop, which she opened in the fashionable town of Brighton, in 1976.

Her vision was to sell products with natural ingredients, ethically sourced, and simply packaged. Early on, she offered refillable bottles. She made no hyperbolic claims for her products, nor advertised. It turns out she didn’t need to. She quickly took a business partner, Ian McGlinn, to fund her second shop, in Chichester. By 1978, with her husband back in England, the Body Shop was growing so fast that they started franchising the business to create more shops across the UK, and then across Europe and globally. Many of her early franchisees were women, making many Body Shop stores unusual in a time when most retail shops were owned and run by men.

In 1984, Body Shop was publicly listed  and had around 1,800 shops world-wide. Roddick continued to run the business until 1998, when she stepped down to focus on writing and campaigning. Her books include:

In 2003, Roddick was made a Dame in the New Year’s Honours and then – a bombshell for many of the business’s supporters, Body Shop was sold to L’Oréal.

In 2007, Anita Roddick died of a brain tumour linked to Hepatitis C, which she contracted from a blood transfusion during one of her pregnancies.

What Managers can Learn from Anita Roddick

In reading about Roddick and her story, six lessons come to mind, for both entrepreneurs and managers launching new products, services or businesses within a larger organisation (intrapreneurs).