Steve Jobs is one of the most analysed and written about figures in twentieth century business. On the one hand, what more can the Pocketblog say about him? On the other, how can we possibly ignore him? 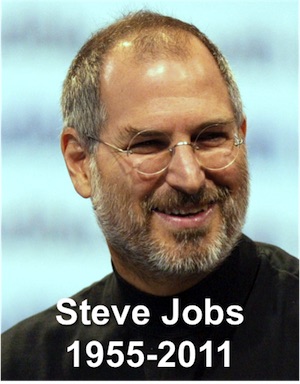 It is hard to disentangle the biography of Steve Jobs from that of the company he co-founded, Apple. Perhaps it is enough to say that he was born in 1955, was adopted, and grew up in California, where he had eclectic interests from the start, but dominating them all was an interest in computing. While working at Atari, he was described by its cofounder, Nolan Bushnall, as ‘very often, the smartest guy in the room’.

Jobs had already been introduced to a technically excellent engineer and enthusiast, Steve Wozniak, with whom he hooked up for a number of minor ventures where Jobs’ acumen was combined with Wozniak’s expertise. In 1976, they formalised the relationship, cofounding Apple together with one of Jobs’ Atari colleagues, Ronald Wayne. Wayne is sometimes described as one of the unluckiest men alive, having sold up his shares early on, for very little money, concerned that of the three, he was the only one with assets at stake, should the nascent company fail.

The rise and rise and fall and rise of Apple is history and very well documented elsewhere. Perhaps the turning point in many ways came around the end of 1983. Concerned about the rise of Microsoft, which had entered the market in 1981 and was starting to threaten Apple’s hegemony in personal computing, Jobs made the decision to hire heavy weight corporate expertise, in the form of former PepsiCo President, John Sculley. Together, they launched the Apple Macintosh with a breakthrough TV advert directed by Ridley Scott, that many people of my generation still remember clearly. Here it is…

However, despite a successful launch, Jobs and Sculley had different visions for the technical basis of future Apple computers. It was the corporate man who won the confidence of the Board and, in 1985, Jobs found himself fired. In the period up to 1996, when Jobs returned to Apple, he built two businesses, whose legacy dominates the entertainment industry.

Whatever happened to the other computer company that Jobs founded: NeXT? Is it just a footnote or did it really have an impact? Very much the latter. It was a NeXT computer that Tim Berners-Lee worked on, when he created what we now call the World-Wide Web. And it was NeXt software that Apple subsequently used to build the iTunes store.

In 1986, Jobs bought the graphics division of George Lucas’ Lucasfilms  for $10 million, and renamed it Pixar. Its first film was Toy Story, and virtually everything it has created since has been Hollywood magic and financial gold-dust. When Jobs sold Pixar to Disney in 2006, he became Disney’s largest shareholder, by far.

When Apple bought NeXt in 1996, Jobs returned to a business that, under three CEOs, had declined from 20% to 5% market share. Jobs cut investment in many projects and focused on new computers and then in other, breakthrough digital appliances: the iPod, iPhone and iPad.

The big innovation, however, was not the technology, but the move into digital sales of music and then books, films, applications and just about anything.

It is a triumph for a view that split Jobs from Apple all the way back in 1985: the integration of software and hardware.

In 2011, Jobs resigned from Apple towards the end of a long battle with pancreatic cancer, which finally defeated him in October 2011. Pocketblog marked the event.

What can the rest of us learn from Jobs?

I think that what made Jobs remarkable was the way he embraced opposites and brought unity to them. Form and Function, of course, in designs that he called ‘insanely great’. His products had to be the best they could be in both beauty and power.

Microsoft and IBM became powerful players, and today it is Google and Samsung too. But all of these companies respect a significant divide between hardware and software. Each specialises. Apple did not and continues to create tight integration and a closed system that, many argue, is the key to their simplicity and reliability*.

But the biggest integration is almost certainly the one that is primarily responsible for Apple’s awesome commercial dominance today (early 2015): the fusion of computing and entertainment. The iTunes store that sells TV, film, books, and more to consume on Apple hardware, via Apple software. Whatever next: Apple production?

So what else can we learn?

I take away five lessons form the business life of Steve Jobs:

In His Own Words

Whilst it is tempting to post some of Jobs’ greatest presentations in the form of landmark product launches, instead, here is a short video of Jobs addressing students of Standford University, in 2005.

* Declaration of interest: the author of this blog switched from Windows to Mac 12 months ago and has no regrets.