By many measures, General Colin Powell is one of the most accomplished military leaders of the twentieth century, holding a slew of ‘first’s and ‘youngest’s. What makes him interesting to the Management Pocketblog is the depth and breadth of his ideas on leadership, that have been widely publicised, most notably by the late Oren Harari, who was a business professor at the University of San Francisco. His credibility as a ‘leadership guru’ is immense, and much of his philosophy of leadership applies well to managers who lead within civilian organisations. 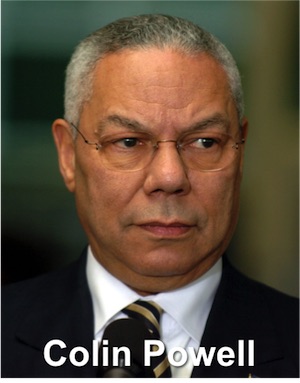 Colin Powell was born in 1937 to Jamaican immigrant parents, and grew up in the Bronx in New York. He attended the City College of New York, earning a BS in geology in 1958. But during his time there, he made his most important choice of all. As an averagely academic student at the time, he found his greatest fulfilment attending the Reserve Officer Training Corps. He was good at it too, so on graduation, he joined the US Army, attended basic training, and was commissioned as a second Lieutenant.

Powell’s early military career was dominated by distinguished tours of duty in Vietnam, rising to Lieutenant Colonel in 1970. He was wounded, and also decorated for bravery. He returned the US and to a series of political roles with the Nixon and Reagan administrations, rising up through the ranks of general staff, until President George HW Bush appointed him the youngest (and first African American) Chairman of the Joint Chiefs of Staff in 1989.

He served in that role until 1993, and then retired from the military. He was courted by both Republican and Democratic parties as a potential Presidential or Vice-Presidential candidate and, after declaring himself a Republican, declined to stand, saying he did not have the fire in the belly he would need for such a role. However, in the 2000 Presidential election, Republican Party candidate George W Bush declared that, if he won, he would appoint Powell as Secretary of State – which he did.

Powell was a good Secretary of State – widely liked and respected by staff and international politicians. He served during the 11 September attacks and presented the US case for invasion of Iraq to the UN, putting forward evidence of weapons of mass destruction. When he later learned that the evidence he had been given by the CIA was bogus, he apologised and it is likely that this, along with long-running disagreements with Vice President Dick Cheney caused him to resign and not serve in Bush’s second term.

However, he continued (and continues) to serve the US in a range of voluntary roles, most notable of which is the America’s Promise Alliance, which he founded with his wife Alma, and which she continues to chair. It sets out to help create the conditions for success for young people, especially those it identifies as being disadvantaged by lack of resources and opportunities.

In 2013, Powell’s Alma Mater, The City College of New York, transformed its Division of Social Science into the Colin L. Powell School for Civic and Global Leadership. It incorporates the Colin Powell Center, which Powell founded in Harlem (where he was born) to build a culture of service and to inspire young people with a sense of public purpose and responsibility.

Powell’s leadership philosophy started to become well-known when Oren Harari wrote an article in the American Management Association’s monthly magazine, Management Review, called ‘Quotations from Chairman Powell: A Leadership Primer‘ (1996). This was such a successful article (Powell himself praised it) that Harari followed it up with a book: ‘The Leadership Secrets of Colin Powell‘.

Since then, Powell has himself articulated his 13 Rules of Leadership, in his own book, ‘It Worked for Me: In Life and Leadership‘.

Three of the Best for Managers

Combining Powell’s own 13 rules, with the 18 lessons that Harari drew from quotations by Powell in his 1996 article, I would like to extract three that I find most relevant and resonant for business managers.

Powell’s Rule 3:
Avoid Having Your Ego so Close to your Position that When Your Position Falls, Your Ego Goes With It!

I like this a lot, because it is about resilience and also about recognising that you can be wrong, you will be wrong and, indeed, this is sometimes part of your job description. Being wrong is a sign of innovating and taking risks and the measure of a leader is not just in how often you are right, but how you make a decision that turns out to be wrong, and how you respond when the facts reveal themselves.

Harari’s Lesson 8:
‘Organization doesn’t really accomplish anything. Plans don’t accomplish anything, either. Theories of management don’t much matter. Endeavors succeed or fail because of the people involved. Only by attracting the best people will you accomplish great deeds.’

As someone who likes to plan and is enchanted by theories, all I can say is ‘ouch!’ But I also know from my experience as a manager, leader and active project manager that Powell is spot on – plans, processes and models are nothing more than enablers that create a framework to make life easier for the people – and the best will succeed even in their absence. That is, of course, not an argument for abandoning good practices!

Harari’s Lesson 15:
Part I: ‘Use the formula P=40 to 70, in which P stands for the probability of success and the numbers indicate the percentage of information acquired.’
Part II: ‘Once the information is in the 40 to 70 range, go with your gut.’

I hate the way he expresses this, but I love Powell’s sentiment that we need to act on partial knowledge or face being paralysed and acting too late. But on the other hand, acting on too little information is reckless. As in everything, finding the right balance is the key to success.

The last year or so of Pocketblog (and the next to come, I hope) has taught me that the best of the latest fads are rooted in deep wisdom, and that there is so much of it around that our job is to integrate it into our thinking so we are equipped with the flexibility to respond to whatever circumstances throw at us.

That kind of adaptability – coupled with a deep sense of public purpose – is what makes Powell an inspirational figure.

Powell on the most important thing in Leadership (3 mins)