Margaret Heffernan’s caree has been varied and successful – with roles in television production and leading large organisations. Her current focus is as a thought leader in the world of organisational effectiveness, where her ideas are both interesting and practical. 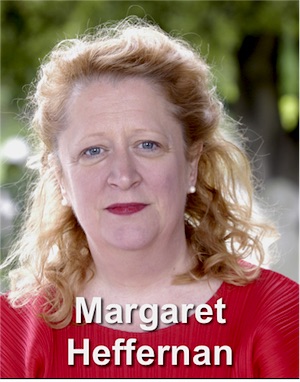 Born in 1955, in Texas, in the USA, Margaret Heffernan grew up in the Netherlands, finished her high school education in London, and graduated in English and Philosophy from the University of Cambridge in 1977. This gave her the perfect (and familiar) springboard for a career at the BBC, where she became a television producer, working on documentary, news and arts programmes.

She went on to run the Independent Programme Producers Association (IPPA – now a part of PACT), before heading off to the US in 1994, to work in public relations, focusing on the technology and media sectors. Through the late 1990s and early in the 2000s, Heffernan seized the opportunities of the internet and became CEO of several new businesses: InfoMation Corporation, ZineZone Corporation and iCAST Corporation. In these roles she won a series of plaudits from industry commentators as a top influencer in the high tech sector.

In 2004 Heffernan entered the ‘portfolio phase’ of her career to date, combining visiting academic roles, writing business books, blogging and commentating, and speaking. She recently published her latest book and has had three appearances to date on TED (a high number – only a small handful of people have spoken three times or more).

Margaret Heffernan has a knack for synthesising the ideas from psychology with her real-world experience as a senior executive working at the sharp end of business. This makes her ideas very appealing to business people who like to feel that  academic ideas are grounded in genuine experience and that their practical wisdom is rooted in sound research.

The clearest thread running through Heffernan’s published thinking is the importance of ‘Social Capital‘ – the network of social relationships that make business effective. Her earlier work focused on the different attitudes women have (compared to men) to ambition, power and motivation in the workplace. Their success comes about, to a fair degree, through greater levels of social interdependency, and Heffernan shows that women-led organisations statistically outperform organisations led by men and attributes the difference to that factor.

Wilful Blindness addresses a favourite topic of mine: cognitive bias in decision making. It is full of case studies, interviews, science and highly quotable sound-bites, like:

‘Stereotypes are energy-saving devices; they let us make shortcuts that feel just fine. That’s why they’re so persistent.’

‘”We have monuments for people who have displayed physical courage in war,” Lieutenant Colonel Krawchuk mused. “But where are the monuments to people who said no, we won’t do this because it’s a bad or wrong or unethical decision?”‘

‘The sooner we associate long hours and multitasking with incompetence and carelessness, the better.’

‘Because it takes less brain power to believe than to doubt, we are, when tired or distracted, gullible.’

In her next book, A Bigger Prize, Heffernan starts to look at what makes organisations successful and determines that it is not about being the best or hiring the best or nurturing the best: it is about creating a culture of helpfulness, so that everyone is comfortable with asking for help and ready and willing to offer their help. Competition is damaging and co-operation is adaptive. This is another topic I found absorbing and, when put back to back with an all-time favourite book of mine, ‘The Origins of Virtue‘, Heffernan and Ridley have covered a lot of the ground that most fascinates me in this arena.

Heffernan’s latest book seems like a continuation along the same trajectory. Indeed, the five core ideas in Beyond Measure feel like something of a summation of her thinking. Maybe this one quote summarises everything: ‘Walk around. Talk to people. Turn the other cheek. Build a network. Feed that network. Don’t get boxed in.’ Not a revolutionary idea, but a small change that can have a big impact on the way you do your work.

Heffernan is one of TED’s stars with huge viewing figures for her first two TED talks:

The subject of her latest talk, Why it’s time to forget the pecking order at work, is drawn from her book, A Bigger Prize.