It is a truism that we live in a global culture. But it is not in fact quite true: we live in a highly connected set of cultures and making political and business interactions work across the divides between them is far from easy. Fons Trompenaars is the foremost thinker in how businesses can understand and manage these differences pragmatically. 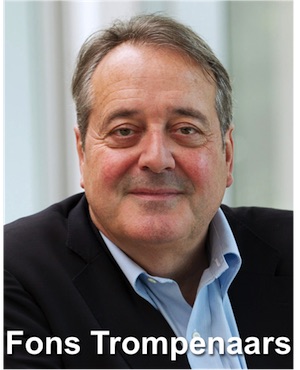 Fons Trompenaars was born in 1953, with a Dutch father and French mother. He grew up in the Netherlands and earned a Master’s degree in Business Economics at Vrije Universiteit Amsterdam in 1979. He then moved to the US, to continue his education at Wharton, gaining a PhD in 1983.

Working for Royal Dutch Shell, Trompenaars gained experience of many business cultures, being posted to nine countries in less than that number of years. He also met long-term collaborator and business partner, the British academic, Charles Hampden-Turner. In 1989, the two of them founded a consulting business, then called the Centre for International Business Studies. It has subsequently been acquired by international professional services firm KPMG, and renamed Trompenaars Hampden-Turner (THT) Consulting.

In 1997, the two wrote their hugely influential book, Riding the Waves of Culture: Understanding Diversity in Global Business, which set out their model for understanding cultural differences.

Accolades, awards and academic positions have followed for Trompenaars, as have several other books that build upon his ideas and spread them outwards, but Riding the Waves of Culture remains his pre-eminent work and very much a modern business classic that no manager who works in an international context can afford to be ignorant of.

Riding the Waves of Culture

The essential thesis at the heart of Trompenaars’ thinking is that the challenge of leadership is to resolve choices – dilemmas – in the context of different cultural pressures. People from all cultures face much the same dilemmas, but their cultural backgrounds influence the way they will choose to address those dilemmas. Leaders need to reconcile those differences to create effective change and to manage efficiently.

Trompenaars and Hampden-Turner created a powerful model for understanding cultural differences. Superficially their model resembles that of Geert Hofstede, another Dutchman. However, while Hofstede focuses on the underlying psychology that drives differences, Trompenaars and Hampden-Turner are more practical in their approach, aiming to create a tool that managers can use to work with the differences. Both approaches are, however, informed by meticulous research.

Riding the Waves defines culture as the rules and approaches a coherent society adopts, to resolve the issues it faces. These become ingrained in its population and therefore second nature, at which point an external observer recognises them as culture. Consequently, we need to understand the rules and approaches we take and those that the people we deal with accept, and therefore we need to recognise and adapt ourselves to the differences. Failure to recognise and adapt to cultural differences leads to a breakdown in communication and trust.

The model that Trompenaars and Hampden-Turner created sets out seven continua that they represent as pairs of opposite attitudes. Each culture occupies a unique position on each of these continua, creating a very rich array of possibilities. Even were there only 5 positions on each scale, this would yield 78,000 possible cultures, rising to 824,000 with a seven-point scale. Let’s look at the seven continua.

Universalist cultures value and apply rigorous standards and like to enforce rules. Particularist societies prefer the flexibility of adapting the rules to the circumstances, valuing people over set rules and therefore embracing exceptions.

This is about how a society values the group. Collectivist cultures place care for the group and the need for consensus above the needs of the individuals within it. Individualist cultures value autonomy and the creative opportunities they believe it offers.

The extent to which people within a culture display their emotions (Affective) or keep them hidden (Neutral). In Neutral cultures, reason plays a far more overt role in decision-making.

A subtle concept about the way we relate to one another. In Specific cultures relationships form around the sharing of specific resources or objectives, whereas in Diffuse cultures, the sharing is far more widespread, creating more holistic relationships.

This dimension represents the way society evaluates our status. Achievement-oriented cultures are more meritocratic and allocate status according to performance, whilst Ascription-oriented cultures pay greater attention to background, education, and connections.

Unlike those above, this dimension is not about social attitudes, but in this case attitudes to time. Sequential cultures tend to be more orderly and value planning more than Synchronic cultures, which take a flexible view of time, with greater spontaneity and less orderly use of time.

This continuum is also not about social relationships, but the expectations about whether we as a society can either control nature (Internal) or are subject to it (External).  The labels refer to the source of control for our society – either internal, within society or external, from the environment.

Where Trompenaars and Hampden-Turner create a powerful resource for managers is in articulating, for each of the 14 polarities, a series of strategies that allow us to adapt to a culture that shows each of these 14 characteristics. This is vital, because your own cultural preferences will be different from those of people of another country or even region within your own country.

In addition, their research also rated many countries on each of the scales, allowing readers to understand the cultural preferences of the people they are dealing with. Many of their findings match recognisable cultural stereotypes, but many do not. If you want to figure out why a British business person with a strong preference for rules and an orderly approach to time, but a mixed attitude to merit versus background can best do business with their counterpart in Latin America, with a fluid approach to rules, a highly emotional response to pressure, and an ambiguous relationship with time, Riding the Waves of Culture is the book for you.

A Pocketbook to help you with managing across cultural differences

You may enjoy the Cross-cultural Business Pocketbook