I first became aware of the ideas of James MacGregor Burns in the late 1990s, and they literally transformed my understanding of Leadership. I am not alone: an earlier generation reading Burns’ 1978 book Leadership was likewise affected. His academic rigour, effortless prose and new approach led directly to the massive growth in leadership courses in business schools, first in the US, and then globally. 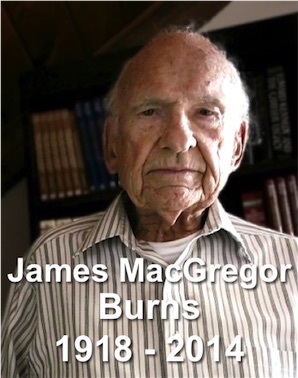 James MacGregor Burns was born in 1918, in Melrose, Massachusetts and grew up in Burlington. He graduated from Williams College in 1939 and went to Washington DC as a congressional intern. During America’s Second World War, he served in the pacific campaign, and documented soldiers’ stories. He was also decorated several times.

After the war, he gained his masters degree and PhD in Government from Harvard, before returning to Williams College to teach. He remained there for his whole career.

Burns was a prolific author, first coming to prominence as author of an influential biography of FD Roosevelt, The Lion and the Fox, in 1956. He was to follow this with a second volume in 1970, Roosevelt: The Soldier of Freedom, which won him a Pulitzer Prize the following year. He also engaged in politics directly, standing as a Democrat candidate for Congress in 1958. This is how he came to know JF Kennedy; a relationship which led to his 1960 biography, John Kennedy: A Political Profile.

Politics interested Burns deeply. His first book, Congress on Trial: The Legislative Process and the Administrative State (1949), was widely praised. However, through that medium, he became interested in the nature of leadership. He argued that it was poorly understood and needed to be studied. More than that, he said, we need to educate ourselves to become better leaders.

It was as an historian and political biographer that he first approached the topic of leadership, but his accomplishment was to develop unifying ideas about leadership that were equally valuable in the social and political arena, and in the business and managerial arena. His 1978 book, Leadership, is regarded as a classic and triggered much subsequent research, thinking, and writing.

This is so much so, that the University of Maryland renamed its Academy of Leadership after him and there is an endowed professorial Chair in his name at Harvard (Barbara Kellerman is currently the James MacGregor Burns Lecturer in Public Leadership). Of his subsequent writing on leadership (of which there is much), 2003’s Transforming Leadership: A New Pursuit of Happiness is, perhaps, the most important. My copy has an exceptionally high ‘post-it count’ meaning I have found much in it of value.

Burns continued working into his 90s. His last book, Fire and Light: How the Enlightenment Transformed Our World, was released in 2013, just a year before his death in July 2014.

Without a doubt, Burns’ main contribution to thinking on leadership was to distinguish two patterns of leadership: transactional and transforming. This distinction is an empirical one, based on his observations. By setting it out clearly, he spurred a generation of researchers to develop the concept of what he called transforming leadership, but which has come to be better known as transformational leadership.

This creates a relationship between leaders and their followers, based on reciprocity – the exchange of support or action by the followers for rewards like recognition, praise, ratings, pay, or status. This kind of leadership works when both sides feel they are getting a fair deal from the other. Much business and managerial leadership takes this form. So too does the run-of-the-mill political leadership, where, in democracies, politicians exchange promises for votes, and in more autocratic systems, these promises and favours are exchanged for support of the powerful and acquiescence of the masses.

This relationship is founded on a drive in the leader to create change. Burns identified two primary sources of that drive: a lust for power, or a sense of vision or values. I suggest our perception of this difference often reflects our sympathy for the vision. Burns assesses Hitler as driven by power, but he may have argued it was a vision.

Setting aside factional arguments, transformational leaders establish their leadership by building trust with their followers that means the transactions can be more one sided: followers act or support the leader through loyalty, rather than exchange. To do this, the leader must engage both the rational and emotional concerns of their followers – hearts and minds. This allows them to link up power bases from many sources, to strengthen their cause.

Burns saw transformational leaders as using their leadership to*:

Commentators often mis-characterise the distinction as being about change: transformational leaders create change, while transactional leaders work within the status quo. This is not how Burns saw things – certainly not by the new century when he wrote Transforming Leadership. The difference is the type of change. Transactional change substitutes parts, whilst transformational change is a wholesale change at a fundamental, structural level. It is also driven by values, rather than by pragmatism.

Perhaps the most astonishing conclusion that Burns drew was that transformational leadership will have a transforming effect on both the leader and the followers. Done properly, each will raise the others to higher levels of motivation and moral (within the compass of the leader’s vision) action.

This leads to The Burns Paradox: “If leadership and followership are so intertwined and fluid, how do we distinguish conceptually between leaders and followers?”**

The resolution that Burns offers is that we need to start to take a more subtle and complex systems view: leadership creates change, but in the right circumstances, the concepts of leader and follower melt away. Forget the current anti-capitalist overtones. This sounds very much like self-governing, collective-responsibility principle of pure anarchism to me. And I like it.