Indra Nooyi is neither a ‘business thinker’ nor a successful entrepreneur. She is a great example of talent and hard work combining to reach the top. As CEO of Pepsico, her leadership offers some great lessons for leaders and managers. 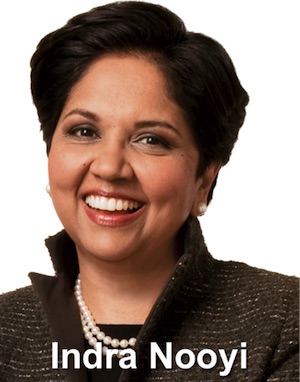 Indra Krishnamurthy was born in Chennai (then, Madras) in southern India, in 1955 and studied Physics, Chemistry and Maths at Madras Christian College, earning her Bachelor’s degree in 1974. She then secured an MBA from the Indian Institute of Management Calcutta (now Kolkata), before working as a product manager in India for two international corporations.

In 1978, she moved to the US, to study for a Masters in Public and Private Management, at Yale. During that time, she also did an internship with leading consultancy firm Booz Allen Hamilton. When she completed her Master’s, she went to work for another consultancy, Boston Consulting Group, as a strategy consultant. She followed this by two further appointments in industry, before moving to Pepsico in 1994, as their Chief Strategist.

With successful major projects to her name, she was promoted to President and CFO in 2001 and, when that continued, along with substantial profit growth, she emerged as the successful candidate for CEO and was appointed in 2006.

Nooyi’s success with the business has been won in the face of adverse market conditions. This offers us some important lessons.

The first lesson is her early determination to face up to the hard truth that junk food and sugary drinks are unhealthy, yet these accounted for a large part of Pepsico’s business. Her alternative would have been to carry on regardless, and see her market fall away.

Following on from this, she followed the trend of health awareness, rather than fighting it. Although the strategy has shifted again, Nooyi completely re-organised Pepsico’s business into three categories:   ‘fun for you’ (such as potato chips and regular soda), ‘better for you’ (diet or low-fat versions of snacks and sodas), and ‘good for you’ (items such as oatmeal). Now, she is embracing a new and more nuanced approach, evolving her strategy with the times.

3. Lead with your Strategy

As a former strategy consultant and Chief Strategy Officer, this may not be surprising, but it is a lesson. When she took over as CEO, sales were dropping substantially – for Pepsico and many of its competitors. She could easily have focused on stripping out costs and delivering profit for a few years and then, when all the fat was gone from the business (and much of the muscle too), she could have moved on, leaving the problem for the next CEO. But Nooyi set out a long term strategy that her board accepted. They also accepted that: ‘there will be hiccups along the way, but you have our support, so go make it happen.’ The effect on shareholder dividends has been pleasing to most.

Pleasing to most; except, possibly to investor Nelson Peltz, who took the role of activist investor and called for a major demerger, that Nooyi rejected. She also saw it as a major distraction. But rather than fight it or ignore it, she chose to engage positively: the two sides agreed to appoint an adviser to Peltz’s Trian Partners as a ‘neutral’ nominee to the board. She was able to argue her case rationally, with a stakeholder who was now in a position to listen.

Finally – and Nooyi is far from the only person in our Management Thinkers series to have this characteristic – she exhibits total attention to detail and demands both flawless execution of the smallest details, along with a brutally rapid response to any shortcomings. This is especially so where the brand is at stake.

In her own words

There are some great videos of Nooyi speaking about herself and her work on the Makers website.