Robert Greenleaf was a successful corporate manager, who read a book that crystallised his thinking. But he only started to change the world once he retired. His thinking goes against the grain for many corporate and political leaders, who want to exert control. Instead, he argued, leaders need to be servants first. 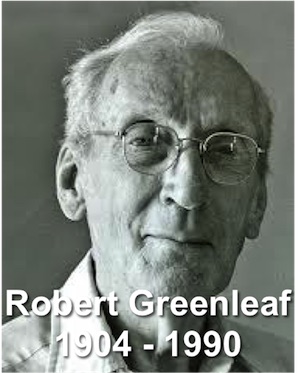 Robert Greenleaf was born and grew up in rural Indiana, and studied mathematics at Carleton College in Minnesota. He graduated in 1926, and went straight into a career at the American Telephone and Telegraph Company (AT&T as it now is). He stayed there, playing a series of important managerial roles, until his early retirement in 1964.

From the earliest days, Greenleaf was aware that big corporations did not serve their employees well. He strove at AT&T to change that from within, and had some notable successes. But in 1958, reading Herman Hesse’s novella, Journey To The East, Greenleaf had a revelation. The pivotal character Leo, whilst seeming to only serve a group of travellers, is in fact, taking upon himself the role of motivator, teacher and guide. When he leaves, the group flounders. Leo has, in truth, been leading the group.

This led Greenleaf to form his concept of Servant Leadership.

He strived to live according to his philosophy of ethical leadership, and died in 1990. The Greenleaf Center continues to promote his work.

The Genesis of Servant Leadership

Arguably, Greenleaf’s work has been based on a mighty misinterpretation of Hesse’s message. For Leo tells the central character that, in abandoning their goal when he left, the group failed its test. Enlightened people need to sustain their own self-leadership.

However, Greenleaf’s interpretation is coherent and would, I believe, have found favour with Hesse. He argues that Leo, is, in serving the group, its leader. From this, Greenleaf goes on to deduce that leaders need to serve those who follow them, as Leo served the group in Hesse’s novella.

Why do I suggest Hesse may have favoured this interpretation? For two reasons:

Servant Leadership is a model of leadership based on the ethical principle that  leaders must first of all serve those who follow them. They have a moral responsibility to help the people they serve grow and thrive, as people. There are therefore a number of behaviours that are characteristic of a servant leader. Thus, Greenleaf’s concept is a behaviours, or roles-based, model of leadership. He argued that we can all become servant leaders by making these behaviours the centre of our practice.

Some of the behaviours a servant leader needs to exhibit are: listening, empathy and healing relationships, awareness, foresight and conceptualising the world, building communities and stewarding resources, influencing through persuasion, rather than control, and finally, a commitment to the growth and wellbeing of the people they serve.

… seems disappointingly slight in the upper echelons of modern business, public service (yes, I know) and politics. Whilst a former British Prime Minister referred to servant leadership, I doubt he will be remembered for it. The current crop of world leaders hardly exhibit any signs of it (and neither do some of the prominent candidates for future roles).

Where I see servant leadership in my work, is in many of the small business entrepreneurs and among middle managers. These people are where deep care for colleagues and staff are most manifest in my experience. It would be lovely if our culture allowed these qualities to thrive as those people rise to top leadership roles on national and global platforms.

Robert Greenleaf in his own Words

I can only find one video of Greenleaf himself. Here he is, in later years, talking about the role of institutions.