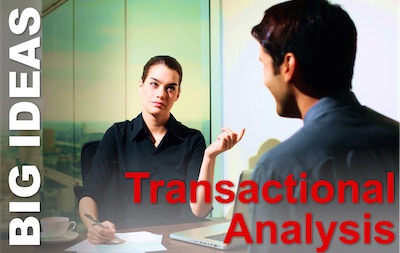 Why Use Transactional Analysis?

Eric Berne developed Transactional Analysis as a tool for psychotherapy. Unlike Freud’s earlier work, Berne was less interested in personality. Rather, he focused on social interactions. These are TA’s ‘Transactions’.

But for us, the value of Transactional Analysis is outside its therapeutic uses. Among the many ideas that Berne, and people after him derived, are some that can help us at work.

What is Transactional Analysis?

You are a manager or business professional. So therapy isn’t your thing. So, for you, think of Transactional Analysis as a toolbox. It’s filled with ways to help you understand social interactions.

When someone says something that doesn’t sit well with you

If a certain situation makes you feel small

Transactional Analysis has tools that will help you understand these types of situation. And, more valuable still, you can then improve them.

‘a theory of personality and a systematic psychotherapy for personal growth and personal change’.

Unfortunately for us, though, this places an emphasis on TA’s therapeutic basis. So let me take a statement from the jacket of one of the best books about Transactional Analysis. It’s ‘TA Today’ (US|UK) by Ian Stewart and Vann Joines, and it says:

Transactional Analysis is a model for understanding human personality, relationships and communication.

Now you can see why it’s helpful to us.

How to Use Transactional Analysis

There is far too much content in the TA Toolbox for us to cover it here. You may like one of our earlier articles, Transactional Analysis for Managers.

So here, I want to signpost a simple guide to learning more about Transactional Analysis.

Everything starts with Berne’s idea that we can occupy three ego states. These are ways of thinking and feeling about the world. A helpful simplification is that:

Repeats attitudes and beliefs it has been taught, without examining them for itself.

Acts according to its feelings, without thinking through the consequences of its actions.

Thinks through each situation, and acts on the evidence, looking for the best outcome.

Flavour of Parent and Child States

There are two ways we use each of the Parent and Child ego states.

We use this to take responsibility for others, to care for them, and to treat them as a Child.

We use this to criticise and blame. Here, we apply a set of rules and identify variances from them.

Here we let our emotions rule us without constraint. We do what we want, and let our joy, anger, frustration, sadness rule us.

Here, we let pressure from a Parent figure drive us to conform, so we can get positive recognition. Our emotional need for endorsement outweighs our underlying feelings.

Below is an example of the iconic representation of Transactional Analysis. It shows the two people who are communicating:

The ‘Sender’ (or ‘Agent’) initiates the interaction with a ‘Transactional Stimulus’.

The ‘Receiver’ (or ‘Respondent’) will then say or do something that  relates to the stimulus. This is the ‘Transactional Response’.

Transactional Analysis strictly refers to determining the ego states from which the transactions are sent and received.

The illustration shows a ‘Complementary Transaction’. Here, the response goes back from the receiving ego state to the sending ego state. In his book, ‘Games People Play’, (US|UK) Berne says:

communication will proceed as long as transactions are complementary.

Most productive workplace communication is Adult-Adult. Inappropriate Parent-Child can be manipulative, patronising, controlling, aggressive or more.

And it gets worse. Transactions can also be ‘Crossed’. Then communication largely breaks down. They can also be ‘Hidden’, or ‘Ulterior’. In these, the psychological meaning is not conveyed by the surface language. Two messages are relayed at once.

Repetitive use of the same pattern of unhelpful transactions is a ‘Game’. Games may or may not communicate, but they are not productive. Indeed, they can be harmful. In therapy, practitioners see examples of harm at both psychological and physical levels.

For us, the harm is most likely to be limited to poor productivity and workplace strife. but harm it is, nonetheless. Bullying is one example.

Berne categorised many different Games. They explain what is going on with a wide range of poor and abusive interactions.

A student of Berne’s, Stephen Karpma, introduced the ‘Drama Triangle’. This is a tool to help understand the Games from a different perspective. It allows you to identify the roles players take as that of:

There is no ‘good’ role here. Playing out a Drama is not constructive. The Adult Ego State does not play Games or engage in Dramas.

On the Drama Triangle, people feel uncomfortable in any role. So, they get a psychological boost by swapping roles. Until the discomfort drives them to switch again. Eventually, they return to where they started and the Drama begins again.

The only resolution comes when one participant steps off the Triangle, and successfully invites the other to join them.

This is a well-known aspect of Transactional Analysis. Berne believed we all start life in a simple state:

An impoverished emotional environment in childhood can lead  to a less resourceful Life Position. This can be one of:

For us though, we’re less interested in permanent Life Positions. A bad day at work can leave you or a colleague feeling:

The last idea we’ll look at is the idea of ‘Stroke’. Let’s get one thing clear: in most workplaces around the world, Do NOT stroke a colleague. It can get you into a mess of trouble!

But not being acknowledged in the corridor… That feels bad. Because it is a Stroke withheld.

A child needs a cuddle. And an adult wants a nod, a smile, a hand gesture, or some form of recognition. Berne labelled this with the term ‘Recognition-Hunger’. We all need to receive Strokes. If we cannot get a Positive Stroke, we’ll do something bad, just to get a Negative one.

What is Your experience of Transactional Analysis