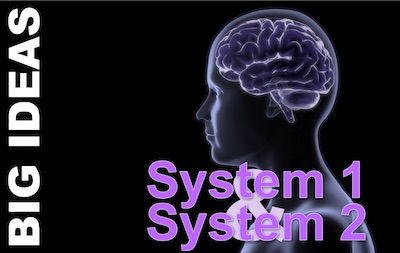 Why do We Need Two Systems?

I’m not going to try to answer the hard version of this question here. That could more precisely be framed as ‘why did the human brain evolve to use two systems?’ Suffice to say, each system has its strengths. And we’ve needed all these strengths to survive, both in the past and present. We have System 1 and System 2 because we need them both!

The Need for a Two Systems Model

I could frame the easier question as this: ‘why do we have a two-system model to explain how our thinking works?’ The answer to this lies in Stanovich and West’s paper:

‘Individual Differences in Reasoning: Implications for the Rationality Debate?’

In a nutshell, Stanovich and West ask a simple question. ‘Why don’t people in psychology experiments do what we rationally expect them to do?’ That is, why do they seem to behave irrationally, when a rational response would be… rational?

They look at four possible answers, which I’ll simplify as:

Their conclusion was fundamental. Experimenters had failed to understand how we interpret certain types of task. In simple terms, we have two different ways of tackling mental problems.

They cite a dozen papers that describe ‘dual process’ theories. Each theory is different and uses its own terminology. But they are similar enough for Stanovich and West to gather the modes under the two headings.  The simple terms they used were System 1 and System 2.

What are System 1 and System 2?

System 1 and System 2 are two modes of processing information. We apply them in different circumstances.

System 1 is your rapid response system. Its strength lies in working quickly and needing less energy and effort. It makes judgments based on experiences and generalisations, and usually gets things right. When you use it, it doesn’t ‘feel like thinking’.

System 1 deals with the vast majority of everyday thinking. It does so automatically. To do this, it applies simple rules that psychologists call ‘heuristics’. But a quick assessment and general rules can get things wrong. So, System 1 sometimes lets you down. System 1 is responsible for biases, stereotypes, superstition, gullibility, naiveté, and prejudice.

But System 1 also has strengths beyond its speed. It excels at aesthetics, creatively linking ideas, empathy, intuition, and sense of humour.

System 2 works hard and takes a lot of energy. Its evolutionary weakness is that we can’t afford to run System 2 all the time. And neither could we react quickly enough to threats.

You are using System 2 when you are deliberately paying attention to something, or actively ‘thinking’. It deals in details, calculations, and rationality. Its other strengths include:

All of this comes at a cost. System 2 sometimes misses the forest by studying the undergrowth. It also follows logical arguments and fails to make a logical leap – ‘lateral thinking’ is a System 1 strength. And finally, it’s hard to maintain System 2 concentration for long periods; it tires easily.

How to Optimise Your Use of System 1 and System 2

Both System 1 and System 2 are vital to your success in life in general, and work in particular. What is important is that you can access the right system at the right time.

In professional and managerial work, there are familiar situations that arise. Let’s look at a few.

Here, System 1 is in its element. It is great at synthesizing ideas and seeing the wider context. Encourage it by using a lot of different stimuli to overwhelm System 2. And by adopting a playful, undisciplined attitude, to suppress rational processing.

Here, System 2 can give your System 1 a head start. You need a lot of the features described above. But System 2 can guide an analysis of the problem. It can also  select a suitable step-wise process to follow. At the right time, you can then encourage System 1 to do its thing and find creative solutions.

Here’s another context where System 1 needs to dominate. When everything is going well, it’s all you’ll need. System 1 is good at this stuff. But it can be on a hair trigger. So in tricky situations, you’ll need System 2 to hold it back and take control. This is especially so when tempers rise, or someone has a problem and needs your help.

Organisational life presents many complex situations: commercial, political, technical, or crisis. To assess them well, you’ll need both System 1 and System 2. Let System 1 take in the whole breadth of the situation, and activate your intuition about what’s going on. Then deploy System 2 to analyse your intuition. Test it against the evidence. Check the details. Try some ‘what ifs’.

System 1 has a habit of jumping to conclusions. It is good at quick, instinctive choices. Organisational life means more careful thought. By all means listen to System 1’s intuitions. But then allow System 2 to think them through carefully and modify or reject them. Evidence is your friend, and System 2 is the mode that knows how to assess it.

And so we come to System 2’s exclusive domain. Estimation, calculation and planning are all System 2 activities. The more you can focus on the task and deal with the details, the more successful you will be.

I dare not say there is no role for System 1 here. But I think it wise to say that any role it has, is subordinate and minor.

What is Your experience of System 1 and System 2?

The book to read on this – and especially the errors System 1 makes on your behalf is ‘Thinking, Fast and Slow’ (US|UK). This is the summary of Daniel Kahneman‘s life’s work. And it is tremendously readable. If the ideas in it are new to you, I think it safe to say it will rock your world.