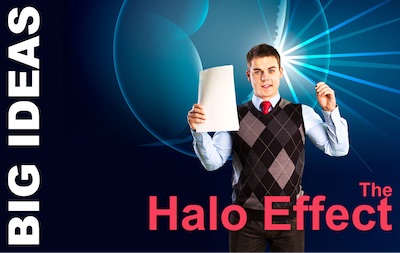 The thing about cognitive biases is their pervasiveness. They can affect all areas of our thinking. But some have a bigger impact on management, leadership, and business decisions. And one example is the Halo Effect.

The halo effect can take a single example of excellence, and create the impression that we have a star in our midst. This could be company results, an effective middle manager, or a new hire.

With all of these, we have the ability to see something great and assume it is part of a pattern. The evidence for this may be lacking. Indeed, it may be a one-off hot-spot in a field of mediocrity.

Why do we use the term, Halo Effect?

Edward L Thorndike got interested in correlations found in a 1915 study.  So he did his own experiment. What he found was a high correlation when military officers rated  their soldiers’:

A neat soldier was  more likely to be rated as having a good character. A soldier with a poorer physique might be deemed to show less leadership capability. Thorndike called this ‘halo error’ in his 1920 paper: “A Constant Error in Psychological Ratings.”

His word ‘halo’ drew an analogy with early Christian and pre-Christian symbolism. Pre-Roman and Roman art used a glowing circle to focus attention on key figures. This became the familiar halo above the heads of saints in mediaeval and Renaissance art .

Why do Humans Succumb to the Halo Effect?

Shortcuts make thinking and decision-making quicker. They use less energy and can improve survival rates. But they sometimes get things wrong.

The halo effective is an example of an holistic simplification. It is easier to think of someone as all good or all bad. Understanding a nuanced character is harder. Think about the difference between simple drama and literature and great art.

Simple stories have ‘comic-book’ goodies and baddies. Often their costume, name, or facial features  tell us what we need to know. Now think of great fiction. It’s hard to figure out whether some of the characters are good or bad. Or are they wise or foolish, noble or base? The answer is that they are neither.

Of course, evolution crafted the Halo Effect. And some shortcuts work. In a primitive hunting society there is a causal link between stature and hunting prowess. And maybe between hunting prowess and intelligence. And probably between intelligence (avoids danger) and physical appearance (no scarring and disfigurement).

These no longer correlate well in a modern workplace. But we still can’t avoid the impression that a good looking colleague will also be a smart operator.

What is the Halo Effect?

The literature (and popular websites) abound with examples. Here are a few that are supported by experiment and research:

Its halo affects just about everything: intelligence, kindness, and competence. Even acquittal by juries.

Common names are perceived as lending intelligence to the owner, more so than unusual names. And if a salesperson has a similar name to yours, you are more likely to buy.

We see the halo effect determine our assessment of status. And maybe that’s fair, because a survey of Wall Street salaries found they do correlate with height. But that’s probably the halo effect linking height to capability.

A sparkly celebrity endorsement casts a positive halo over a product. Watch TV adverts, and look in your magazines.

When they arrive well-presented and on time, they will be perceived as efficient and a good worker.

A run of good performance seems to suggest a well run company. If its performance dips, it must be the fault of the systems, or the CEO. Or maybe there is a random element of luck.

A smart document seems to hold accurate information and analysis. If it’s scruffy, we assume it is not as good. That goes for websites too.

Phil Rosenzweig wrote a book called ‘The Halo Effect’ (US|UK) that looks at a range of these effects in business. It’s well worth a read.

Definition of the Halo Effect

The halo effect is…

when an impression formed in one area, influences opinion in another area.

Horns and Halo: How we Treat our Staff

It’s worth mentioning that the halo effect works in both ways. ‘Good in x means good in y’ is the common formulation.

But the opposite bias is just as prevalent. Bad in x means bad in y. This is sometimes known as the Devil effect, the Pitchfork effect, or the Horns effect. The metaphor is the opposite of sainthood. Generically, you’ll also hear of this as the Horns and Halo effect.

It is at its most insidious when applied to:

Think about the effects of this all-to-common chain of reasoning:

‘You are not like me. I don’t like this aspect of who you are. So you must also be less capable than me.’

It is responsible for so much that has been and is wrong in our world. In business we must rise above it. Not just because it is right to do so. But because the very diversity it damages is good for business success.

What is Your experience of the Halo Effect?