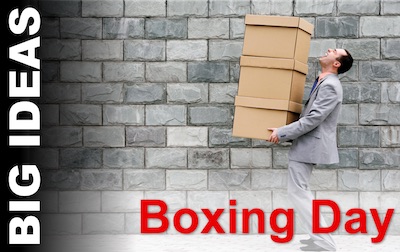 Why is the day after Christmas apparently given over to the ancient pugilistic art of boxing? Well, it isn’t. That’s not the origin of Boxing Day.

That said, Boxing Day’s origins are a little unclear. And of the many variant theories, one outlier is that the now traditional Boxing Day sports once did include boxing.

We’ll set that one aside for lack of… evidence.

Here are a set of interwoven theories. Each is plausible. Each has some evidence to support it. And each has the same fundamental assumption at its core.

So, somewhere in among these, may be the truth.

Alms for the Poor

Most religions deem it a blessing to give to people in need. And humanists take the same view. In Mediaeval Europe one way of giving money to the poor was in the Alms Box. You would find these in places of worship.

As early as the late Roman/early Christian era, metal boxes were secured outside churches. These were there to collect offerings linked to the Feast of St Stephen. Yup, that’s right. It’s the day Good King Wenceslas, a 10th century Bohemian (Czech) Duke, looked out.

And when does the Roman Catholic church celebrate St Stephen’s Day? You guessed it: 26 December.

In this theory, the term derives from Mediaeval piggy banks. Like many people now, the less wealthy saved for a Christmas party throughout the year.

To avoid temptation, they often used an earthenware pot with a slot, but no way to get the money out. You had to smash the Christmas box to release your savings.

In France, these boxes were called ‘tirelire’.

Tirelire, a Christmas box; a box having a cleft on the lid, or in the side, for money to enter it; used in France by begging Fryers, and here by Butlers, and Prentices, etc.

Prentices and Butlers, huh? When I was a lad… My mother used to give a small cash gift each year (I thought it extravagantly large) to the:

And probably more too. And yes, in the 1960s, those were pretty-much gender-fixed roles.

Anyway… She referred to these gifts as their Christmas Box. The tradition goes back at least to the 1830s. The Oxford English Dictionary defines Boxing Day as;

the first week-day after Christmas-day, observed as a holiday on which post-men, errand-boys, and servants of various kinds expect to receive a Christmas-box

By the way, it wasn’t just my mother. My father ran a hardware shop and did likewise for the:

The thing I always wondered (and still do) is this… Is the Christmas Box a thank you for a year of service past, or an incentive for good service in the year to come? We think of a tip as a thank you. But the origin is as the latter. It’s a kind of bribe: To Insure (sic!) Prompt Service.

It always comes down to either Samuel Johnson or Samuel Pepys. This time it’s Pepys. He thought it was a thank you to tradesman in his diary entry for 19 December 1663.

Thence by coach to my shoemaker’s and paid all there, and gave something to the boys’ box against Christmas.

A Day off for the Servants

And so to butlers. My favourite theory is that Christmas boxes for tradespeople derive from an older tradition. In Britain, servants would have to wait on their wealthy masters on Christmas Day.

In return, the masters gave them a day off, the next day, to visit their families. And they would give each servant a gift. This would be a box to take home to their families. Depending on generosity, it may have been a nice gift, a cash bonus, of some leftover food.

And so began the tradition of turkey sandwiches on Boxing Day!

What is Your Theory for the Origin of Boxing Day?

We’d love to hear your favourite theory. Please leave it in the comments below.