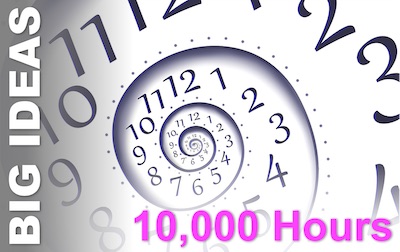 How do you become an expert at something, and truly master it? The answer, some will tell you, is with 10,000 hours of practice.

The so-called rule of 10,000 hours originated in a best-selling book, ‘Outliers’, by journalist, Malcolm Gladwell. He based the ideas at the core of his book on research that Anders Ericsson carried out, along with Ralf Krampe, and Clemens Tesch-Römer.

Then, he was a Professor at the University of Colorado. Now he’s at Florida State University. But here is the thing… Ericsson has been openly critical of the 10,000 hours formulation. And that offers both good news and bad for any of us who want to become world-class masters of any field.

Put simply, Gladwell proposes that, to master a skill, we need to accumulate 10,000 hours of practice.

In his book, ‘Outliers’ (US|UK), Gladwell argues from some key examples. It was 10,000 hours of practice in all night bars and clubs in Hamburg that allowed the Beatles to become such polished performers, and 10,000 hours of coding that led to Bill Gates’s massive software development success.

Regular practice early in life, accumulating to 10,000 hours was Gladwell’s secret source of success – although not in sport, he says.

The idea behind extended practice leading thorough competence to mastery is not new. In mediaeval trades guilds, learning and expertise passed through three levels. Three, five, even seven years as an apprentice to a master would lead to the level known as journeyman. At this level of expertise, a craftsman or tradesman was expected to have all the skills to turn out fine work, unsupervised, and participate in the basic training of apprentices. But after another period, the journeyman would be expected to so master their craft that they could innovate and turn out exceptional pieces of the very highest standards. At this stage they could be trusted with leading the education of the next generation.

Here is the start of the controversy. It appears likely that Gladwell selected 10,000 hours because it is a nice round number. It certainly doesn’t represent any specific and empirically derived period. It may be an approximation to an average, but if it is, then it’s only in one field. The work that Gladwell mainly cited was that of Anders Ericsson and his co-workers (‘The Role of Deliberate Practice in the Acquisition of Expert Performance’). And at the time, they focused on musicians. Indeed, one of Ericsson’s chief critiques is that in some fields, if such a number does exist, it’s very different from 10,000!

The role of genetics

Firstly, what is the role of your genetic inheritance? Gladwell himself notes that his 10,000 principle does not apply to sports.If you are born short, with a narrow palm-to-palm arm-spread, your chances of playing world-class basketball are slim.  Heavy-boned and short-limbed? Marathon world records are  unlikely to fall to you.

There seems likely to be some genetic component to many skills from art and music to maths and architecture.

But even so, perhaps 10,000 hours of practice will raise you to high levels anyway. Perhaps not what others may achieve; but mastery too?

The Need for Deliberate Practice

Ericsson does not demur from the assertion that practice improves performance. His own research findings prove that. But a point he emphasises is that the type of practice matters. Psychologists use the term ‘deliberate practice’ to refer to structured and highly effective practice of skills.

Deliberate practice operates at the limits of our capabilities. Each time you practice deliberately, you stretch yourself a little further. Simple repetition is not enough.

And it is also essential that as you practice, you constantly ensure that your practice takes you in the right direction; what you do is right. This highlights the need for a skilled trainer, coach or guide. Or, at the very least, clear and direct feedback that tells you if what you are doing is right. I’m sure the Beatles’ early audiences in Hamburg clubs were more than ready to signal their disapproval of poor performance!

In his book, ‘The Click Moment’ (US|UK), Frans Johansson argues that deliberate practice can only predict success in fields that have particularly stable rule sets. Examples he cites include: tennis, chess, and classical music. In these, the rules don’t change, and the best techniques that lead to success only do so rarely. So, if you study them deeply, you can certainly approach the skill levels of the best.

Gladwell has tried to clarify and defend his assertions. He has conceded that natural/genetic capabilities are important too:

I could play chess for 100 years and I’ll never be a grandmaster. The point is simply that natural ability requires a huge investment of time in order to be made manifest.

How can You Learn Well?

This is a massive field, so here are a few tips.

What is Your experience of Deliberate Practice and Long Hours of Learning?

Do you have 10,000 hours of learning about anything? Or have you mastered something without 10,000 hours?

Let us know your thoughts in the comments, and we’ll respond to each contribution.