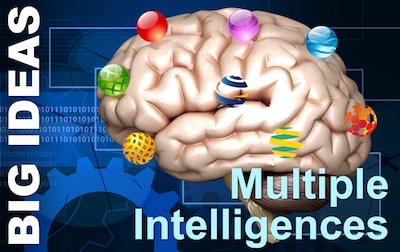 The idea of Multiple Intelligences is the brainchild of Harvard Professor, Howard Gardner. As big ideas go, they don’t get bigger and simpler than this one.

Big, because the idea of Multiple Intelligences addresses something fundamental in all of us. It’s about our different capacities to excel in the full variety of human endeavours. It has a lot to say about how we should value the people around us, and the best way to educate our children.

Yet it is also disarmingly simple. There’s no single measure of intelligence. And neither should we reserve the label ‘intelligent’ for a narrow band of people who are simply intelligent in one of a small number of ways. Human potential expresses itself in a vast variety of forms. And so does our intelligence.

In truth, the concept of human intelligence is subtle and complex. And let’s not go anywhere near intelligence in other species. Just a a cursory glance online at what we mean by the word intelligence will reveal vast depths of research. A good place to start, if you want to peek into the rabbit hole, is the Wikipedia article on General Intelligence. Here, you’ll find that we have both crystallised and fluid intelligence (Gc and Gf). And then we have a broad range of other general intelligence capabilities like:

The Multiple Intelligences model bridges the gap. It adds sophistication to the over-simplistic understanding of intelligence. Too often we measure book-learning and basic school-taught skills like maths and reading. But it avoids the complexity and disputes of the academic study of human intelligence.

It is therefore a useful model for managers, trainers, and educators. If you are one of those, you probably care most about how to develop people and draw the best out of them. And these, I think, were very much Gardner’s motivations too.

What are Multiple Intelligences?

Gardner published his ideas in his book ‘Frames of Mind’ (US|UK). Through the editions, he has suggested additional intelligences to the seven he first proposed. In the latest UK edition (the US reprint is newer), he adopts an eighth, and discusses two more candidates.

These are the eight Multiple Intelligences Gardner proposes. Clearly, we have all of them to a degree. Their combinations give us our talents.

Our ability to read, write and communicate using language.
It comes out in authors, journalists, orators, debaters and people who speak several languages.

We see this in analytical thinkers who value reason and are good at calculation.
People with this intelligence in depth are well-suited to science and engineering. But it’s also valuable in other logical disciplines, like the law and accountancy, economics and even detective work.

This intelligence gives us a strong feeling for  spatial relationships, shape, colour and form.
So, it is strong in artists, architects and designers. But, combined with logical/mathematical intelligence, we also see it in navigators and cartographers.

This intelligence makes you sensitive to tone, melody, harmony and rhythm.
It is well developed in people who perform or compose music. And combined with verbal/linguistic intelligence, it leads to great songwriting.

This intelligence manifests in how we use our bodies. It gives us a precise awareness of movement, and a strong ability to control our bodies.
Some excel at balance and co-ordination. They use their whole body with grace and power/ These include sportspeople, actors, and dancers.
Others exercise precise control of their hands or feet. Combining this with a strong visual/spatial intelligence, we see people excel in areas like sculpture, surgery, and art.

This intelligence helps us socialise and collaborate. It gives us our understanding of people which helps us to put them at their ease. It accounts for confidence in making small-talk, listening intently, and leading naturally. Teachers, therapists, nurses and good salespeople excel interpersonally.

Gardner has considered the possibility of a spiritual, or existential intelligence, but has rejected it as not being sufficiently well-defined to fit his model. It seems to overlap with intrapersonal intelligence too much.

The naturalist has affinity for the natural world. They understand how it works and often have an uncanny knack for memorising hundreds of names. If they can, they collect – rocks, insects, photos – anything. Gardeners, pet-owners, environmentalists, and scientists exercise this intelligence. So too do the people who photograph bus, train or lorry numbers.

Gardner gets as close as he can to defining intelligence with this statement:

And, whilst he doesn’t define Multiple Intelligences explicitly, he does expose his understanding of them. In doing so, I think he deftly tackles head on many of the criticisms of his model. ‘It’s just a model’, he seems to be saying:

These intelligences are fictions – at most, useful fictions – for discussing processes and abilities that (like all of life) are continuous with one another; Nature brooks no sharp discontinuities of the sort proposed here.’

to illuminate scientific issues and to tackle pressing practical problems.’

This reminds me of Kurt Lewin’s quote:

There is nothing so practical as a good theory.’

Criticism of the Multiple Intelligences Model

There has been plenty of criticism of the Multiple Intelligences theory. As is often the case, the Infed website covers the model and its criticisms extremely well. As (at time of writing) does the Wikipedia page.

But I want to set those aside for the reasons I’ve covered. Gardner’s Multiple Intelligences model is a simplification of the stupendously hard problem of human intelligence. but it is one that is useful. As a manager, you’ll do well to recognise the multiple intelligences of your team. If you want to get the best from them, my prescription is simple:

What is Your experience of Multiple Intelligences?