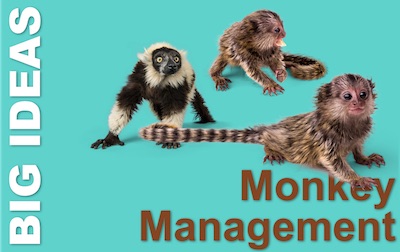 Why Do You Need to Manage Monkeys?

You bump into a colleague in the corridor and they ask you about a problem they have. That problem, argued William Oncken Junior, is like a monkey on their back.

So, you say the words that you’ll regret for the rest of the day:

Leave it with me, I’ll get back to you.’

Now the monkey jumps off your colleague’s shoulder, and onto yours.

Now it’s your monkey. You’ve got to carry it around until you get back to your desk. Then, you can put it on your desk, with everyone else’s monkeys. You are now responsible for its health and welfare. And, at the back of your desk, getting squeezed and forgotten…

Your own monkeys. Not the ones you’ve adopted from colleagues, but the ones you were supposed to be responsible for.

If you keep taking other people’s monkeys, is it any surprise you’re overworking? Yet, at the same time, some of your colleagues can go home early. Why? Because there’s no progress they can make, while you are backed-up and can’t attend to the one thing they need, to get on.

That’s why you need Monkey Management!

What is Monkey Management?

Monkey Management is a set of principles (Oncken calls them ‘rules’) for how to handle the common problem of taking on other people’s monkeys. William Oncken Jr and Donald Wass set it out in a Harvard Business Review article called: ‘Management Time: Who’s got the Monkey‘. The article’s first publication in 1974 was so successful that HBR re-published it in 1999, with a commentary by Stephen Covey.

In the article, Oncken and Wass set out five rules for Monkey Management.

Then, Kenneth Blanchard invited Oncken to co-author a One Minute Manager book. They worked with Hal Burrows to write the best-selling book: ‘The One Minute Manager Meets the Monkey’ (US|UK). In this book, they revised the rules, and it’s that version you’ll find in this article.

Definition of a ‘Monkey’

In both the HBR article and the book, Oncken defines a Monkey thus:

A monkey is the next move’

This is important, because it is this that makes Monkey Management easier.

How to Make Monkey Management Work for you

The revised four rules that Oncken developed for the One Minute Manager book are:

You must always be sure to describe the appropriate next moves clearly, before you assign the monkey.

All monkeys need to be owned and looked after at the lowest level of the organisation that is compatible with their welfare. This means that the person who gets the monkey must be able to carry out the next moves without undue risk to themselves, to the organisation, or to you (as their supervisor). Getting this right often means finding a sufficiently small and safe next move, to ensure you don’t end up with the monkey!

You are responsible for risk management. So, every monkey you assign to one of your people must have its own insurance policy. This is about the level of authority that you delegate. In the book, there are two levels:

The article is more subtle, and I think I prefer its five degrees of initiative you can delegate:

Remember that what your team members do remains your responsibility. So, you need to exercise proper follow-up. Give every monkey a checkup appointment, to ensure it stays healthy.

What if You Don’t Assign the Monkey Clearly

The commonest trap is that managers are not clear enough who gets to look after the monkey. They want to sound caring, but don’t want the monkey. So they can tend to use weasel words that convey a mixed message:

So, what about the monkey?

So, what happens when you go one way up the corridor, and your colleague goes the other?

Now the monkey is in trouble. With one foot on each shoulder, it soon gets uncomfortable. So it jumps off, and lands on the floor. Now, it’s abandoned by both. Unloved and uncared-for, it gets kicked by every passing person and soon starts to suffer. Of all the four rules, I think rule 2 is the most important.

What is Your experience of Monkey Management?

We’d love to hear your experiences of managing monkeys, and questions you have about monkey management. Please leave them in the comments below, and we’ll respond as soon as we can.