Why do we need CSR?

The world’s going to hell in a handcart, and it’s capitalism that’s setting the direction. We need some restraints on our continuing plundering of the planet’s resources, polluting of its habitats, and abuse of its inhabitants. So some people would argue.

Corporate Social Responsibility is an attempt to inject a moral imperative into corporations’ over-arching responsibilities to their shareholders. It requires corporations to behave as responsible members of society. And it’s hard to find fault with that idea. Because corporations are a part of society, embedded within it, and feeding off it. Why should they not also respect it and even contribute to it?

Some Egregious Examples of the need for CSR

I shan’t name names. You know many of them. But all I need to do to demonstrate the need for some corporate social responsibility is mention:

CSR means different things to different people. To some it’s about ethics in the way you conduct business, while to others it’s an obligation to respect human rights. For some, the focus is on communities and to others its focus should be global environments. What all agree is that CSR extends a corporation’s traditional unitary focus on its responsibility to its shareholders. CSR is some form of responsibility to a corporation’s wider community; its stakeholders.

So, whilst the idea seems new, it certainly isn’t. Milton Friedman decried it as a breach of a corporation’s duty to make money back in 1958. And the concept of a stakeholder, in contrast to a shareholder or stockholder, goes back to 1963 (AVGY). There is a history of the concept of stakeholders in ‘The Influence Agenda’ (US|UK) by Mike Clayton (yes, that’s me).

With all of these differing perspectives, it’s not hard to find a definition of CSR. The problem is deciding which ones to include!

Here’s my favourite, from Mallen Baker. It’s succinct and wide-ranging:

Investopedia expands on this and implies a position on a debate we’ll cover below:

CSR is a corporation’s ‘initiatives to assess and take responsibility for the company’s effects on environmental and social wellbeing. The term generally applies to efforts that go beyond what may be required by regulators or environmental protection groups.’

The University of Edinburgh focuses on ethics:

‘CSR aims to ensure that companies conduct their business in a way that is ethical. This means taking account of their social, economic and environmental impact, and consideration of human rights.’

‘Movement aimed at encouraging companies to be more aware of the impact of their business on the rest of society, including their own stakeholders and the environment.’

‘Corporate social responsibility (CSR) is a business approach that contributes to sustainable development by delivering economic, social and environmental benefits for all stakeholders.’

I’m not sure that the use of the word ‘movement’ in the first is as contemporary as an online source should be, but it offers no date for the source.

Anyway… enough of this. You get the gist.

The US and Europe: Two Views on CSR

One reason (among many) for the range of different interpretations of CSR is the Atlantic Ocean, and the cultural divide it represents.

European administrations and many of the corporations based there take paternalistic or values-led approaches to CSR. For them, it is a moral duty to operate with integrity and social responsibility.

That’s not to say US legislators and corporations aren’t moral. But their moral compass is oriented a little more to staying legal than good for its own sake. Many of the CSR practices of US corporations reflect  the minimal federal legislation and varying state legislation they are subject to.

But there is another dimension to US CSR, which exceeds the European approach: corporate philanthropy. There is an extensive and proud tradition that goes back to the Rockefeller and Carnegie era of the late nineteenth and early twentieth centuries. And it continues today in the hands (and wealth) of people like Buffet and Gates.

Volunteers and Conscripts to CSR

So this leads us to the two primary forms of CSR:

Some corporations will take on whatever social responsibilities they select, because it accords to the values of the business and the image its leaders wish to project. Others will do what they must to comply with legislation and regulation, but they do no more. And often, they do so grudgingly. This gives rise to the term ‘greenwash’, meaning the way a corporation cloaks itself in a superficial adherence to environmental policies, whilst continuing its business as usual profit motive with little regard to impacts.

‘Good name in man and woman, dear my lord,
Is the immediate jewel of their souls:
…
But he that filches from me my good name
Robs me of that which not enriches him,
And makes me poor indeed.’

And that’s true of corporations too. Many pursue CSR simply to protect a reputation they have, rather than to do good in itself. Warren Buffet is, as always, clear and to the point:

‘Corporate social responsibility is a hard-edged business decision. Not because it is a nice thing to do or because people are forcing us to do it… because it is good for our business.’

How to Pursue your Corporate Social Responsibility

Kaplan & Norton gave us a clear concept of balance in the ‘Balanced Scorecard’. It is a means for a corporation to balance out financial with other corporate priorities. Social responsibility can be one or several of these.

John Elkington developed an approach to balance in formal reporting, which he termed the ‘Triple Bottom Line’. He suggested that we add to the usual profit-based bottom line measure of a company’s performance. Businesses should also prepare bottom line measures in a ‘people account’ and in a ‘planet account’. This gives us the three pillars of 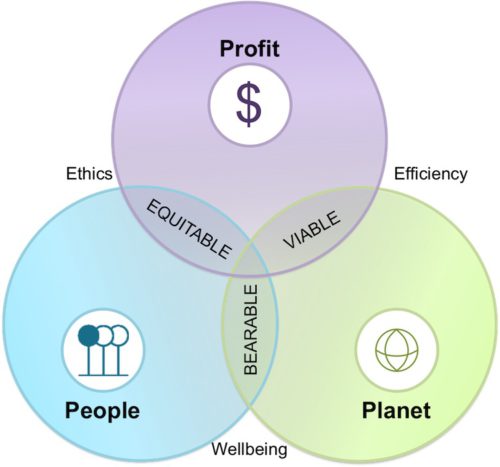 It’s somewhat outside the scope of this article to look at the triple bottom line in detail. Happily, we can refer you to an earlier pocketblog, in which we focused on it.

The last question to answer, and we’ll only do so briefly, is the one Friedman posed. If a corporation’s duty is to its owners, the shareholders, then what is its responsibility to wider society?

That, dear reader, is a conundrum I will leave you to wrestle with.

What is Your experience of CSR?

We’d love to hear your experiences and opinions about CSR. Please leave them in the comments below.

What next for CSR?

I so wanted to pinch these ideas. But, in view of Pocketbooks’ own corporate social responsibility, I shan’t. Instead, I will point you to an excellent article in Forbes’ online edition, called: ‘8 Corporate Social Responsibility (CSR) Trends To Look For In 2018‘.