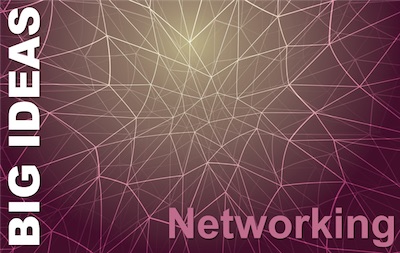 For some people, the idea of networking seems less appealing than dental extraction. You’re in a room full of people you don’t know, and you have to ‘make contacts’. Business networking gets a bad rap.

But let’s look at it objectively. Talking to people, making alliances, helping others, and finding people you can trust… They are hardwired into whatever it is that makes us human. We are social beings.

The ‘Social Network’ that is Facebook did not become a global colossus because it invented something new. It did so, because it gave us an easier way to do what we do naturally: connect with other people.

Strip it of its management-speak baggage, and networking is not just a big idea. It is The Big Idea that gave humans our route to world domination. It is the source of our common humanity.

Why do We Need Networking?

For most of us – and almost certainly you, if you are reading this – our work involves people. You rely on them for:

Pretty much everything, in fact. And that will remain true, until AI (Artificial Intelligence) genuinely becomes a dominant player on global business and public service. And even then, you’ll rely on people for company, conversation, sport, and a social life.

So the reality of networking – starting, maintaining, and building relationships – is simple… None but a few people can do without it.

What gets in the way, is the business/corporate/management mumbo-jumbo that seems to surround the word.

Networking is a process that fosters the exchange of information and ideas among individuals or groups that share a common interest… Professionals connect their business network through a series of symbolic ties and contacts.

Networking is a socioeconomic business activity by which businesspeople and entrepreneurs meet to form business relationships and to recognize, create, or act upon business opportunities, share information and seek potential partners for ventures.

But it does get better (I promise I’ll stop soon).

The Entrepreneur.com Encyclopedia page (18 May 2018) defines networking like this:

Developing and using contacts made in business for purposes beyond the reason for the initial contact. For example, a sales representative may ask a customer for names of others who may be interested in his product.

A Helpful Definition of Networking

Let’s start with Jon Warner, author of the Networking Pocketbook. He doesn’t give a definition of networking. Rather, he gives eight. This is in line with his assertion – that I agree with – that networking is:

We have to Talk about Online Social Networking

As I suggested in the introduction, the online social networks are nothing more than a technological attempt to replicate some aspects of effective person-to-person interactions. And, just as in real life, our social interactions are in many circles:

And there are plenty of others. These have become some of the most successful players in the industry (and, indeed, some of the biggest businesses on the planet) because they better replicate the features people most value, than their competitors. But they do nothing  fundamental that people have not been doing for many thousands of year. It’s just that they move the conversations from the inner table, club, office, or bar to their website or app.

The Networking Pocketbook is one of many, many sources of good advice for business people, managers, and professionals, on how to network well, in the work context. Jon Warner suggests a four-step process of:

It’s a pleasing acronym, that captures a lot of excellent guidance and tips.We’ll take a quick look at what lies behind each of these stages.

This stage starts with building up the assets you’ll need for networking and matures into investing in the new relationships you form, at their early stages.

As you’d expect, this is like looking after a small shoot of a plant and helping it grow into a healthy and mature thing. This is when you’ll be able to start to harvest the benefits of your investment.

A relationship can last a lifetime. But, only if you continue to look after it. That means continuing investment. But, done well, that relationship can bud off into new shoots, as you each introduce new contacts to the other. It’s the network you form as much as the individual relationships, that can fuel your career, and your social life.

What is Your Experience of Networking?

The Networking Pocketbook is full of tips, techniques, and tools to build an maintain successful relationships that will enhance your professional an social life.

And, if you want to learn a little bit more about the science of social network analysis, take a look at our article about Karen Stephenson: Social Network Analysis.