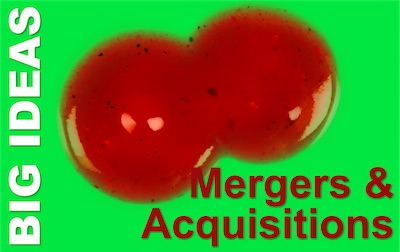 Mergers and Acquisitions – usually shortened to M&A – are a part of business life. Owners and leaders see them as a way to grow their businesses, with the hope of making them more profitable.

They are intense, hard work, and risky ventures. Half of them fail to deliver the returns that the analysts predict.

So, the only people who can be sure to profit from them are the professionals that move from one M&A engagement to the next, the:

Why Start an M&A Transaction?

There are lots of forms, but every M&A transaction has the same fundamental goal: to build a better company.

There are three primary ways that can happen, creating three major reasons for an M&A transaction:

M&A is really one strategy for business growth. However, seen from the perspective of the advisory and financial services business, it is one approach to corporate financing. It is the transaction that buys, sells, or combines companies.

The principle behind M&A is simple. The whole is greater than the sum of the parts. In this case, the value of the two companies together will exceed that of the two separate companies. The frequency with which that is true – at least to a significant extent – is sadly lower than anyone would like. But optimism reigns, and M&As continue.

Strong companies buy weaker companies to grow. Weaker businesses agree to be bought when they fear they cannot survive alone.

In a merger, two comparably-sized or valued organisations join to become a new business. Usually it will take a new or blended name. The term ‘merger of equals’ is sometimes used but, often, this is a bit of political spin and a sop to the stakeholders in one party who know that the truth is that they will become subsumed over time. Mergers are rarely well-balanced, whatever the presentational story.

An acquisition is often more honest. One business is buying another to gain access to something of value. Often, products, markets, and staff that are not considered to be of value will shortly be shed. If the smaller company retains any autonomy, it will usually be as a subsidiary. A company that is being considered for a merger or acquisition is sometimes referred to as the ‘target’.

The Much-touted ‘Synergy Savings’ of M&A

Closing offices and outlets, firing people, decommissioning plant, merging logistics, and combining marketing campaigns can all lead to cost savings. So too can negotiating bigger discounts with suppliers when you buy larger quantities to serve a bigger corporation.

But these benefits rarely meet the predictions of analysts, and the costs of implementing are always higher. And these are not just the pure cash costs. There’s time, distraction from growing the business, morale, and reputational costs to think of too. Is it any wonder that half of the mergers and acquisitions that take place produce little or no net benefit?

The strongest reasons for M&A are always strategic. The businesses would genuinely enhance one another. As a project manager, I’d suggest that, if you cannot justify an M&A deal on those grounds, then don’t even bother to try to justify it on the basis of ‘synergy’.

What is Your experience of Mergers and Acquisitions?

This is a huge topic and we can only scratch the surface. Have you been involved in any M&As? We’d love to hear your experiences, ideas, and questions. Please leave them in the comments below.