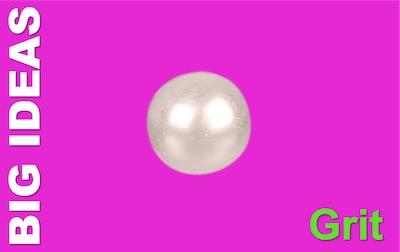 Every few years we seem to get a new aspect of psychology that is ‘more important to success than intelligence’. In the 1990s it was Emotional Intelligence. In the Twenty-teens, it’s Grit.

So what can we learn from a woman whose father told her that she was no genius? Well, when that woman has a string of academic, commercial, and social successes to her credit by her early 40s, perhaps we should listen to her.

Why Does this Matter?

Psychologists have been studying how we become successful since… Well, since before there were psychologists.

Or, to be more precise… Since the people who did what we now call psychology were the people we have always labelled as philosophers.

Plato and Aristotle talked about virtues as the source of success. Among them were courage, temperance, and patience. The Romans included Industria (hard work), and Firmitas (tenacity). And, of course, in the west, we still adhere to the mediaeval Christian virtues that include diligence, which means effort, persistence, and hard work.

The quest for the keys to success continued with modern psychology. We can, perhaps, single out from our Management Thinkers, David McClelland and his student Daniel Goleman. Goleman said that Emotional Quotient (EQ) is a more important predictor of success than Intelligence Quotient (IQ).

The latest in this long line of thinking is Angela Duckworth. One of her mentors is Martin Seligman. Seligman told her early in her academic studies that she needed to find a ‘theory of achievement’. She has.

My trusty Collins Dictionary (1988) tells me that grit is ‘indomitable courage, toughness, or resolution’. And my go-to dictionary for modern usage, Bloomsbury (2004) tells me it means ‘firmness of character’ and ‘determination’. This latter source is a near contemporary of Duckworth’s early work.

Management Pocketbooks’ sister imprint, Teachers’ Pocketbooks, has an excellent book, the Character, Grit & Resilience Pocketbook. Written by C J Simister, the book interprets grit as: ‘the desire and ability to persevere; rising to a challenge and showing stamina and persistence’.

But we will give our definitive definition of Grit, in this context, to Duckworth herself:

perseverance and passion for long-term goals

Duckworth’s research shows that Grit is a strong indicator of learning success. Note, this is not ‘life success’.

Her exemplars span a wide range of contexts, from nursery school to military officer training. In each of these, she finds that the people who do best care deeply about what they are doing and knuckle-down to the hard work of learning. There’s a lot in common here with Carol Dweck‘s ideas of Growth Mindset.

The secret sauce that Duckworth uncovered is:

Success = Perseverance of effort + Consistency of interest over time

For her, the genius her father failed to see in her is not important. What is are long-term perseverance combined with passion. So, achievement does not arise from a single act, or a sequence of acts. It comes from a continual, long-term habit.

Duckworth gathered all of her research, observations, and compelling anecdotes into a highly readable, best-selling, book, Grit: The Power of Passion and Perseverance (US|UK).

How to Get Grit

One of the principle cavils against Duckworth’s excellent book is that it fails to offer science-based evidence for how to build grit. What is does offer is a series of insights, which I think are instructive. Duckworth argues that we can develop grit, and it is not dependent on our intelligence or our circumstances. Rather, it’s a matter of will. Here are some of her prescriptions:

In her book, Duckworth has an intriguingly titled chapter, ‘Effort counts twice’. This alludes to the fact that it is doubly important in achieving your goals. The model that underpins this assertion is my favourite part of her book.

This isn’t a quantitative model. But it does neatly summarise a lot of what experience, as well as Duckworth’s research, tells us.

There is something we call talent – some form of learned or innate capacity for gaining a skill. The more talent we have, the easier it is to learn a skill. And the force multiplier for talent is the effort we put in.

So, effort builds skill, by amplifying talent. But it gets a second dip at driving our success. When we apply it to our skill, it amplifies that too, and makes it productive.

Critiques of Grit as a Big Idea

As with so many ideas in psychology (an obvious comparator here is Power Poses), Grit has come under a lot of scrutiny, and received multiple critiques.

The first, and most obvious critique is that Grit is, well… obvious.

But here’s the thing: if Duckworth had discovered something that conflicted with a lifetime of experience, and the wisdom of many cultures, wouldn’t that be more worrying?

The more subtle and telling critique comes from parallel research, much of it led by Marcus Crede. His principal finding is that Duckworth’s findings about grit are really all about the perseverance, and not the passion. His work leads him to question the inclusion of consistency of interest (passion) as a useful part of grit. Where grit effectively predicts success, that success comes mainly from perseverance.

And this is one aspect of Conscientiousness – one of the Big Five personality factors. So Crede asks whether Grit is really something distinct.

What is Your experience of Grit?

So, do you think Grit is important enough to be a Big Idea? If it more than ‘just’ persistence. Is passion equally important?