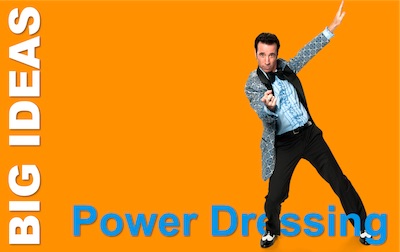 Let’s be under no illusions. This article may be about power dressing. But you aren’t going to get fashion tips here!

Oh no. I am far from remotely qualified on that front. Instead, we’ll look at the phenomenon of power dressing, what it is, and whether it is still relevant.

What is Power Dressing?

Power dressing is more than just dressing to impress. It’s about using your clothes – and your appearance more generally – to project power.

It harnesses what we know about the psychological impact of body shape, colour, and ornament to create an impression of dominance, authority, and control. It is therefore an idea that occupies the intersection of  body language, psychology, and fashion.

You may also be interested in Amy Cuddy’s ideas around Power Posing.

How Did Power Dressing Originate?

Power dressing dates back to the late 1970s. Then, it was clearly about bringing male dress values in ‘white collar’ women’s work-wear. Women started dressing in a more masculine way, to help create perception of power in a male-dominated business world. Think about:

But it wasn’t just women. Men were out to assert their power too (when weren’t they). And in 1976, John T Molloy published his best-selling ‘Dress for Success’, which he followed, two years later, with ‘Women’s Dress for Success’.

As far as I can tell, the term ‘power dressing’ first appeared in print in September 1979. The Syracuse, New York newspaper, The Post-Standard, wrote:

‘The accent has shifted to glamour and power dressing for the city rather than the casual look of past seasons.’

They characterised this a masculine-styled tailored jackets, shoulder pads, and high-quality fabrics. Skirts were below the knee in dark and neutral colours, scarves stood-in for ties, shoes were sensible, and blouses were white or pale colours.

Power dressing was not just for women. Dark suits in neutral colours showed strength, along with plain white shirts. A red tie with a minimal pattern was a strong dominance signal (still a favourite with Western politicians).

Shoes should be dark, shiny, and leather (black only in the UK: brown is acceptable in the US, I believe, and some European countries), as should your belt.

For both men and women…

Accessories like jewellery and watches are crucial to getting your image right. You need to go for quality and find a balance that lets them be seen, while never appearing ostentatious.

I suppose we can gauge this, in part, by the fact that there have been no new editions to Molloy’s Dress for Success books since 1988 (Men) and 1996 (women). But it would be foolish to think that these best sellers have not been replaced by a hundred new book titles and a thousand magazine articles.

Our obsession with looking good will never abate. And, for you as a manager, that is probably right. There is a clear correlation between how we look and how others perceive us.

More than that, how we feel about the way we look has a definite impact on our confidence, and therefore on performance and promotion.

There’s one more thing: likability. We all know that ‘people like people who are like themselves’. But another essential fact is that:

So, dressing a notch above the people around you does not only signal you see yourself at the next level. It also makes you someone whose company and approval others will seek. But again, take care. More than a notch and you will look presumptuous, pompous, and arrogant.

What Does it Mean Today?

Power dressing, then, has not gone away. But speak to people who dress well and take care – especially women – and you will hear a new take on why they do it. It isn’t just about power and competing. A modern view may have many dimensions, that also include things like:

Tips for Power Dressing in the late 2010s

So, I promised no fashion tips. But what should a manager know? Here are a few carefully chosen tips. And the first is to wear what you like and what makes you feel good – your power comes from the inside.

And add to the impression of your clothes with:

And above all, know that whatever the rules, breaking them can add immeasurably to your impact. Often, in the wrong direction. But, under the eye of someone who really understands clothing and appearance, anything goes, and can create a phenomenally positive impression on the people around you.

What is Your experience of Power Dressing?