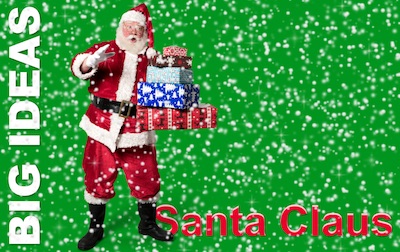 Santa Claus is a chimera of historical and mythical figures.
He is also a cultural winner, having dominated the competing winter-time icons.

But first: if you’re reading this on the day of publication…

Who is Santa Claus?

Santa Claus is a curious amalgam of historical, quasi-historical, mythical, and allegorical figures from many cultures. The name, Santa Claus, however, tells us which of those antecedents has won out culturally.

And that is the Roman Catholic Saint Nicholas, Bishop of Myra. And, if you want to learn more about the legends surrounding him, take a look at one of of the fascinating sources I found: the (almost) ever-trusty Wikipedia.

The Concept of Father Christmas has different roots, and links back to the pre-Christian mid-winter festival of Yule, that fell at or near the winter solstice. The word Yule, by the way, is hard to trace to its Indo-European root, but appears to relate closely to our word ‘jolly’. So, perhaps English speakers should wish one another a Jolly Christmas. It’s less alliterative, maybe, but arguably more historically resonant.

Of course, the Slavic, Germanic, and Norse tribes of dark ages Europe had Woden, Wotan, or Odin. A lot of the All-father’s imagery carries forward into our modern day conception of Saint Nick.

Saint Nick, by the way, is not to be confused with Old Nick. Or, maybe we should… Any crossword puzzler will quickly find an anagram of Santa. But I doubt that’s a real thing. More likely Old Nick is a reminder of the Saxon nicor or Germanic nix, which were water spirits. Wagner’s Rhine Maidens were nix. Still, my favourite (but, I suspect bogus) theory for Old Nick’s name is just linguistically too convenient. But, the argument goes, Old Nick is a contraction of Old Iniquity.

Seriously, yes, they did co-opt familiar American imagery around Santa Claus, and spruce him up with a 1920s design ethic and a bottle of their brew. And successive generations of ad agencies have continued to co-opt the concept to plug the product as a quintessentially American Christmas beverage. In their legendarium, his sleigh has been replaced by an 18-wheeler articulated lorry, festooned with fairy lights

But no, they didn’t invent that imagery. There were plenty of antecedents.

But No One Brand is Alone in co-opting Christmas

In Western countries, almost every consumer brand uses the major holidays and festivals as a hook to hang their marketing on. Christmas is special though. Going back to the original legend of Saint Nicholas’s generosity, it has long been associated with gift-giving.

When the American Santa Claus started to merge with the English Father Christmas in the mid nineteenth century, he brought with him the last elements of our modern concept – gift-giving, chimneys and stockings. In truth, we had to wait a little while for reindeer, and a little longer for the ninth reindeer, Rudolph. But they are a detail. Just the logistics arm of the Santa enterprise.

Rudolph and his story, by the way, are purely a commercial artefact. They were dreamt-up by a copywriter and then converted into a popular song. For your Christmas Quiz, though, how many of the longer-serving eight reindeer can you name? And can you give the original Dutch names of the two who acquired German names along the way?

What is Santa Claus Really?

I think one thing is clear: Santa Claus is a cultural artefact whose identity shifts regularly to meet the needs of the time. In our time, commercialism and the needs of capital have crafted the perfect marketing concept. He represents immaculate customer service, with on-time delivery standards that would make even Jeff Bezos jealous. His customer care is legendary, his transport is environmentally sound, and his only mode of entry is due a twenty first century upgrade.

So, let’s hear it for a Christian Festival, with pre-christian imagery and timing, presided over by a dark ages figure that melds multiple cultural sources, who is in thrall now to global commercial interests, yet remains loved by children in many, many countries, including those that share none of the cultural history from which he emerged.

Whether you left sherry, milk, Guinness, beer or porridge, I hope he didn’t forget you.

By the way, tomorrow is Boxing Day.