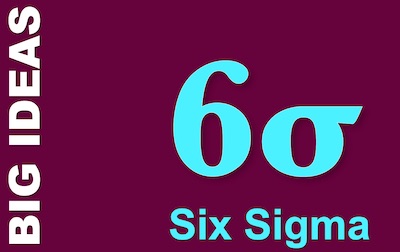 In the world of quality, Six Sigma is one of the biggest names. Total Quality Management (TQM) may aim for zero defects. But Six Sigma aims to reduce defects down to a statistical blip – arguably a more realistic enterprise.

What makes Six Sigma such a compelling proposition is the vast asset base of tools and process that accompany the core idea. What makes it a big idea is the impact it has had on manufacturing, combined with its wider potential in other domains.

The term ‘Six Sigma’ can easily sound like just one more meaningless brand name. But it is far from that.  In fact, it’s a precise description of the big idea at the core of the methodology.

If you take any aspect of a part that a factory manufactures, and measure it, you would expect the mean measurement to match the design specification. All that Six Sigma does is reduce the number of defective parts to six standard deviations. This works out at fewer than four per million units produced. For technical reasons, this error rate is actually calculated from a 4.5σ deviation from a mean shifted 1.5σ from the desired mean. Don’t ask me what those technical reasons are.

What is Six Sigma?

When Motorola introduced the idea of Six Sigma as a means to reduce defects, it was a purely defensive tactic. They wanted to match the quality standards their competitors were able to achieve. Six Sigma was a metric for a quality standard.

Now, it is much more. You can view Six Sigma as a:

However, it is important to understand that Six Sigma does not seek to overhaul the operating model and processes of a business. Rather,  it imposes performance improvement processes on top of existing processes. It is far less radical than business process re-engineering (BPR), for example.

The Benefits of Six Sigma

The primary benefits are:

Only the Toyota Production System (TPS) can boast a comparable toolset of business performance improvement tools. We’ve covered many of them in earlier Pocketblogs:

One of the jewels of the Toyota Production System is Lean Manufacturing. What if you could cross this with Six Sigma, to create Lean Six Sigma? Well, guess what? It’s a thing. While Lean manufacturing focuses on efficiency, speed, and eliminating waste, we can combine pace and cost performance with quality performance: optimising the whole time, cost, quality triangle. Faster, cheaper and better!

This is now a popular approach, not just in manufacturing, but in financial services, transportation, retail, and even Government.

What is Your experience of Six Sigma?

We have written a fair number of articles about quality and quality management. I’d especially recommend: