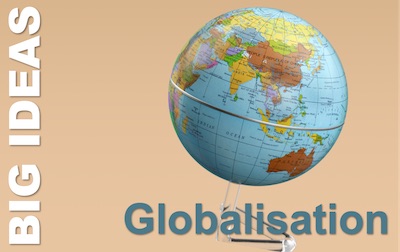 In the early days of 2019, one Big Idea looks a little shaky. Ten years ago, its status seemed assured. Now its future is not so clear. What is Globalisation, and what is its future?

Sadly, I have no crystal ball, so any comments I make about the future of globalisation will be nothing more than opinion. But I can, at least, tell you a little about what this big idea is, and what it means for managers.

From the first moment humanity realised our planet is a finite sphere, it seems to me that globalisation was inevitable. This is not, after all, such a big planet. And we can’t trade with anybody or anything off this planet. We need to be self-sufficient, so connecting across continents is obvious.

And it’s not as if it’s that new an idea. The ancients established trade routes to trade commodities and luxury goods across many thousands of miles. All we did in the second half of the Twentieth Century was to radically speed up transit and make communications instant. The merchant of Venice eagerly awaited news of his argosy. Now, GPS and satellite phones give real-time information. But, I’d argue, the difference is merely quantitative.

Globalisation is nothing more than completing the centuries-long endeavour of connecting every port and trading hub to every other.

Didn’t I just answer that question?

Well, I did, but I somewhat oversimplified it by deliberately skipping the political and social dimensions. And they seem to be the sand in the mechanism.

So, I consulted a set of books that I use for productive time-wasting – browsing to learn new ideas whenever I want a break from proper work. Surprisingly, I have never made the link between the Dorling Kindersley Big Ideas series, and this series of blog posts before. But Globalisation had the power to forge that link, because it is a big idea in not one domain, but many.

I thought I’d use these four books to find definitions that give different perspectives on what globalisation means.

The increasing interconnectedness and interdependencies of societies around the world, as media and culture, consumer goods, and economic interests spread globally.

Very generous, I’d say, to the other disciplines. This is my favourite of the definitions from the series.

Simple and short. There is no definition in the glossary but, in my view, this captures the political imperative, if not the challenge we now face, nicely.

The free flow of money, goods, or people across international borders; increased economic interdependence between countries through the integration of gooods, labour, and capital markets.

I’d say this is a very ‘economics-ish’ definition. But it does also capture the source of the political challenge that twenty-first century globalisation has forged.

I looked up globalisation in the index. There is nothing between Gillette and GlowCap. I have three responses:

The Origins of Globalisation

The Romans had ‘Pax Romana’ – a vast empire held together by trade, within which a citizen could feel safe anywhere. This wasn’t new: the Persians had built a large empire. but what was new was that the Persians sought to impose Persian culture on every society they conquered. Rome was happy to let cultures flourish and contribute trade and taxes to Rome.

It was at the same time that the Silk Road between Europe and China grew up – flourishing until the Middle Ages. It was replaced by global trade mediated by the high tech of the Enlightenment period: ship-rigged merchant vessels. By the end of the UK’s Victorian era, Internationalism was in full spate, powered by the colonial ambitions of European nations (and, increasingly, the USA).

Between the two World Wars, this started to fail, as nations turned in on themselves. But with America’s ‘manifest destiny’ doctrine exporting its ideas around the globe,  international trade grew again in the 1950s and on.

A Word is Coined

And so it was that Theodore Levitt, marketing visionary and HBR editor, coined the term ‘globalisation’ in a 1983 Harvard Business Review article. Along with technology, he argued, it would shape the world. Back in 2016, we said:

What is the Future of Globalisation?

But now it’s 2019. Three years on. And a lot has changed in the prosperous West. In the US, Donald Trump’s ‘America First’ policy eschews globalisation and heads towards isolation. Economically, his administration is putting up more and more tariff walls. Politically, he is pulling US troops and aid out of country after country.

And here, where I write, in the UK… Brexit. Actually, I write these articles in advance. So, as I write this, I have no idea how things will work out.

But my long-term assessment of globalisation is simple.

We are one small planet. Nowhere in our realistically foreseeable future is there anything for humanity beyond our atmosphere.

So, to me, whether we’ll call it globalisation, internationalism, or something else, it’s inevitable.

The only question is this:

While the parts of the Western World disengage from their traditional international trading partners, one country is forging a new vision of globalisation. It’s China, and their multi-trillion dollar New Silk Road.

What is Your experience of Globalisation?