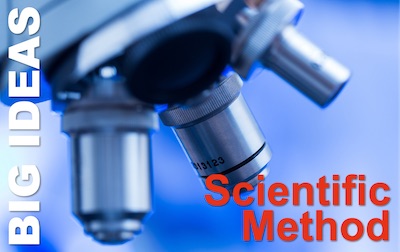 There is no bigger idea than science. So, in this UN International Year of the Periodic Table, I want to celebrate what makes science so powerful: the almost equally big idea of the Scientific Method.

For managers, I’d sum up its utility with a quote from an old friend, Tony Quigley:

If you want your organisational decisions to carry heft and deliver results, you can do no better than to apply the scientific method to your management practices.

Why do we need the Scientific Method?

Science is the systematic organisation of knowledge. But how to organise it? And what can we do with it?

It is the scientific method that has yielded our understanding of the world and its components. It gave us flight, telephony, antiseptic surgery, scissors, optics, and the internet.

We need the scientific method because it is the supreme way we have to uncover the truth. And when we have sound knowledge, we can apply it to create things we value.

What is the Scientific Method?

First, what it isn’t…

The scientific method is not one thing. It’s not a single process, nor a neat concept.

Rather, it is a bundle of attitudes that can be combined in myriad ways to understand the world and test out new ways to put our understanding to use.

These concepts all have huge relevance to any manager, leader, or business professional who wants to get the best results from the choices you have at your discretion.

For me, the scientific method starts with consilience. This is the idea that we can only draw a reliable conclusion when we have multiple pieces of evidence. Ideally, these will come from independent sources and be of varying kinds.

What this means for you, as a manager, is the need to resist the urge to act on a single fact, or observation. Purely anecdotal evidence is also suspect. Yet, as humans, we are prey to biases like:

Of paramount importance is the need for all hypotheses to be open to being proven incorrect. An hypothesis that cannot be falsified is merely a ‘just so’ story. For example, ‘there is a formula for converting food waste into gold’. The fact that we haven’t found it would not appear to falsify it. But no amount of experiment ever could. So, the second factor is vital too…

Your hypothesis must make testable predictions. If your hypothesis is that food waste can be converted to gold at high temperatures and pressures’, you have the basis for an experiment.

For me, this is the weakest of the components of the scientific method. It tracks back to William of Occam, and is sometimes known as ‘Occam’s Razor’. The principle suggests we should start with the simplest hypothesis that is consistent with all of the facts.

What logic dictates though, is that if we don’t have all the facts yet, we may need a more complex hypothesis later.

At the heart of the scientific method is empiricism. This is the conviction that nothing provides better evidence for or against an hypothesis than what happens in the real world. And experiments are the ways we set out to find out what does happen, and what does not.

We use experiments in two ways:

We analyse the outcomes of our experiments with mathematical and statistical methods. Maths is the language of science, and its deep connection with the physical world is still somewhat mysterious and poorly understood.

Crucially, one experiment offers just one set of data points. To be valid, other people must be able to reproduce the experiment in a range of different ways and create consistent results. If they cannot, then either we have:

As a physicist at heart, this is my beef with a lot of the psychology and social science experiments that inform managers and business professionals. Indeed, we’ve written about many of them on this blog. Too few of these experiments have ever been replicated. This is largely the fault of the grant-giving and funding régimes that support new work in preference to repeating existing work that gives intriguing results.

Combine this with small sample sizes (because working with people is costly, time-consuming, and hard to automate) and you have the recipe for bad science. Happily, there is a move among the big psychology institutes around the world to carry out replication experiments for many of the best-known results. Sadly, some of them are not standing up well to replication.

Finally, and most important in the scientific method is the willingness to abandon a theory or hypothesis as soon as the evidence contradicts it. We revise our hypothesis to account for the new data, and create new predictions, which we test with more experimentation.

And, when no fixes and patches can make your hypothesis continue to work in the face of the evidence? Abandon it. This is when we see a ‘paradigm shift’. This is a sudden and substantial change in the way we think.

What is Your experience of the Scientific Method?

Read any Management Pocketbook. Understand the ideas in it. Put some to the test, and assess the outcomes. Reflect on what you learn, and adapt the ideas as necessary. Rinse and repeat indefinitely.

And for an inspiring talk on the Scientific method, from Phil Plait at TEDx…