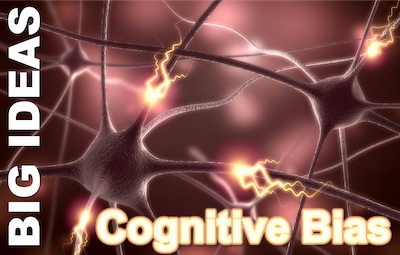 Your brain is wired to think fast. So, to do this, it needs to take shortcuts, that psychologists call heuristics. But these shortcuts don’t always give the right answer. They give rise to cognitive bias.

Cognitive bias is the result of the shortcuts. If every car door you’ve ever encountered opens outwards, it’s a good bet that the next one you encounter will too. That’s a bias in your assumptions. Usually, it serves you well. One day, it may let you down.

But the cognitive biases that we need to worry about are those that are baked into our mental operating system. We make the mistakes without realising it. They lead to bad decisions – sometimes to catastrophe.

Why do we have Cognitive Biases?

There is almost certainly an evolutionary advantage to making snap decisions.

Imagine you’re an early human ancestor hunting in the grassland…

Suddenly, the tall grass rustles. Your brain quickly thinks: ‘LION!’ and you run away. You survive. Congratulations.

Your less well-adapted cousin’s brain doesn’t have that simple heuristic. Their brain thinks: ‘hmmm?’ They follow you about ten paces behind. Oops. Lion food.

You get children and they don’t.

What about your great grandchild who hears rustling in the tall grass and runs. It turns out it was the wind, or an ancient ancestor of the harvest mouse. Well, they survive to have children too.

So a cognitive bias that sometimes gets things wrong can be a good thing, and persist.

What is Cognitive Bias?

Cognitive bias refers to the systematic ways in which the way we gather and frame information influences our judgment.

There are many kinds of cognitive bias and each one has a different effect. But they all carry the possibility of leading to decisions that are not rational, nor are they supported by the evidence.

Cognitive bias was first studied systematically by Israeli researchers, Amos Tversky and Daniel Kahneman. Their work led to Kahneman receiving a Nobel Prize for Economics in 2002. It recognised that he and Tversky were the first researchers to systematically demonstrate that all economic theory before their work was… wrong.

Economics had, until then, assumed that economic decisions were made by rational actors. Kahneman and Tversky showed us that humans are far from rational when we make decisions. Why did Tversky not win the Nobel? Because the rules forbid its award posthumously, and he died young (59) in 1996.

The best way to understand cognitive biases is with some examples. There are a lot to choose from. Wikipedia currently (March 2019) lists nearly 200. It’s a wonder we ever get anything right!

The tendency for your brain to think something must be right or desirable because other people believe or desire it. The more people there are that support it, the more powerful is the urge to join them.

This makes your brain want to continue investing in something that clearly isn’t working in order to avoid crystallising your losses. It consequently inclines us to perpetuate the mistakes of the past.

The tendency to see patterns in random events. We see this in investment bubbles, when we notice a continuous stream of successful investments means we should expect further investment will do well. When you see everyone winning, it’s probably time to bet against them.

This is the mistake we make when we attribute qualities to a limited set of examples that survived. A good example of this is Jim Collins’ ‘Good to Great’. In this, he draws conclusions about what makes a company great, from the best-performing companies. But those were the survivors – maybe the reasons for their successes were more subtle than what they had in common. It seems so. Subsequently, the performance of more than half of them fell away.

The Most Damaging Cognitive Bias in World History

A final word about what I consider to be the single most dangerous cognitive bias. In the World. Full stop.

Confirmation bias is the tendency for your brain to value new information more highly when it supports your existing ideas. We selectively notice and pay attention to information that confirms our preconceptions.

There’s another word for preconceptions in English: prejudices.

What is Your experience of Cognitive Bias?