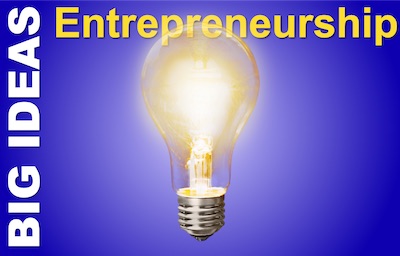 Entrepreneurship is like starting a journey, where you know something about where you want to get to, and little about how you’ll get there. And you rarely end up quite where you expected.

Yet in many ways, entrepreneurship is the driving force behind a national economy. It’s a renewing agent that creates wealth – the acme of the capitalist system

Why Do We Need Entrepreneurship?

I’m not a political scientist. So I can’t and shan’t get into a debate on the relative merits of capitalism and its alternatives. The fact, though, is that many, most, and maybe all economies have capitalism as a component of their system, even if its presence is grey and hard to spot in macro terms. I’d bet that even in North Korea, smart individuals start up small businesses to earn a little extra cash for their families.

Regardless of this, economies need stuff. We have to produce the things we want and need, to live. And in economics, we learn that production needs four things

So, entrepreneurship is vital to a growing capitalist economy. It co-ordinates the money, resources, and people. It’s responsible for bringing forward new inventions, and creating jobs and, occasionally, for huge transitions in society and the nature of its economy.

What drives people to entrepreneurship

There’s another reason why entrepreneurship is important.

Sometimes the drivers are positive – the entrepreneur sees an opportunity and wants to seize it. But it is important to also understand some of the sociology around entrepreneurship in many countries.

For many reasons, there will be a class of people who do not have ready access to jobs – or especially, to jobs that meet their aspirations. If you have had poor educational opportunities, or are an immigrant facing discrimination, the only jobs open to you are menial and low-paid.

Yet, if you are intelligent and ambitious, and want more for yourself and your family, what can you do? The only option is to start your own business. That’s what my father did: the grandson of an immigrant, and an intelligent man who had to leave school at 15. His story is a common one.

An entrepreneur is someone who builds, launches, and operates a new business. So, entrepreneurship requires the ability to spot new opportunity and willingness to take risks. The goal is transforming a vision into a business.

And the breadth of examples is staggering. From a one person side-gig to some of the vast corporations that Elon Musk has set up: SpaceX, Tesla, Hyperloop…

But even Musk started his entrepreneurship at the other end of the spectrum, along with others like: Bill Gates, Jeff Bezos, Alan Sugar, and Richard Branson.

The Concerns of Entrepreneurship

The principles concerns of an entrepreneur include:

It’s easy to think of anyone who invests in a new business as entrepreneurial. But, to my mind, the investors that bring capital to a new venture are not entrepreneurs. Their risk profile is very different. They are hazarding a part of their capital, and that’s their business model. Entrepreneurship means putting all your commitment and time on the line – and often your capital too.

How to do Entrepreneurship

Unlike the trades and the professions, the ‘career pathway’ for an entrepreneur is not defined. There are too many options and huge numbers of different examples. But there are some recognisable landmarks of the entrepreneurial journey:

Some find a problem that the market has failed to solve. They go in search of a solution, find it, and then seek to commercialise it.

Others start with an idea and find a problem that it can answer. That, of course, is the essence of marketing!

Entrepreneurs must have an opportunity to act, during which you have a measure of stability in your life, where an almost total focus on your new business is possible. Entrepreneurship requires great dedication.

Jack of all Trades

As an entrepreneur, you’ll also need a willingness to turn your hand to many different roles, and to learn the skills they require.

At early stages, funding is at a premium, and the entrepreneur will need to fill many roles that different people will take, once the business is successful and revenues can pay for staff. So, entrepreneurship demands a huge appetite for learning, a readiness to make mistakes, and the resilience to learn from those mistakes, and come back for more.

A Consuming Passion to Build a Business

What drives this passion is as diverse as the millions of entrepreneurs around the world today.

But I’d speculate that, for the majority, it’s about providing a secure life for themselves and their families, and a better future for their children.

For others, there’s a dream of wealth, a desire to change the world, or a belief in their product, for example.

Alertness to the Need to Change Direction

Entrepreneurs rarely get their formula right, on day one. So you’ll need a certain agility to spot the need for a shift, and a readiness to pivot.

It’s rarely lack of profitability that kills a start-up. Rather, it’s lack of cash. Managing the day-to-day expenditure isn’t fun to people with an entrepreneurial mindset. But running out of cash is the one set-back you cannot survive. So cash management is a non-negotiable discipline.

What is Your experience of Entrepreneurship?