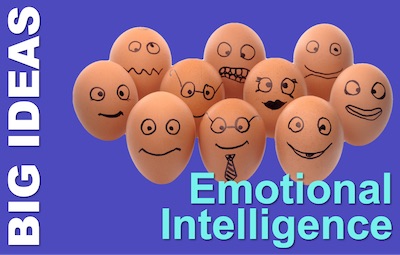 Emotional Intelligence may have felt like a fad in 1995, when we all rushed to buy Daniel Goleman’s book of the same name  (1996 in the UK). But from a perspective of over 20 years on, it still holds its own as a useful concept and very much fits the bill as a Big Idea.

And why not? After all, the theory of emotional intelligence is that the way we succeed in life is through our emotional connections. Firstly with ourselves and then, secondly, with others. And the idea isn’t new. After all, did not Socrates say

Probably not. But it’s been attributed to a host of ancient thinkers, including Aeschylus and Heraclitus.

But I digress. Emotional intelligence allows you to:

Why Do You Need Emotional Intelligence?

But, I think the case is easy to make. Whatever it is, the ability to understand and use emotions in a world where personal communication is essential has to be valuable. And if you can develop that ability and refine it, you will be better able to thrive in a social world.

I think there can be no doubt that some people are better at understanding and managing their own emotions than others. And, likewise, some are more or less capable at reading, interpreting, and working with the emotional responses of the people around them. I’m all for an evidence base – and there is one. But that’s not what interests me here.

Valuable outcomes from high emotional intelligence include competence in:

What is Emotional Intelligence?

A nice, simple working definition is that:

Where do the Ideas of Emotional Intelligence Come from?

A full history of the ideas around emotional intelligence could more than fill an article. But, for managers, I think there are five names to be aware of.

At around the same time, in 1983, Harvard psychologist, Howard Gardner, published the first edition of his book ‘Frames of Mind‘ (US|UK). This introduced a wide audience to his model of ‘Multiple Intelligences‘. Do take a look at the links, as this is valuable information.

Two of his original seven forms of intelligence were:

This clearly laid the groundwork for much of the thinking that followed, and is reflected clearly in the most popular model of emotional intelligence, Daniel Goleman’s.

The first explicit model of emotional intelligence started from a simple definition:

Salovey and Mayer suggested emotional intelligence is made up of four abilities:

Their model is considered to be robust in its interpretation of emotional ability, but is not very useful in a work setting.

Daniel Goleman is a psychologist and journalist. He brought emotional intelligence to the public’s attention with his massive 1998 best seller, ‘Emotional Intelligence’ (US|UK). He followed this up with two further books that deserve to be read by all serious managers:

His model is the most widely known and used in the workplace context.

What is Your experience of Emotional Intelligence?

The Emotional Intelligence Pocketbook is full of tips to improve your emotional and social awareness, and ability to manage feelings – your own and other people’s.