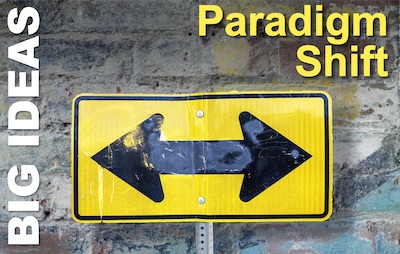 Sometimes a Big Idea gets inflated beyond its carrying capacity. People latch onto it without fully understanding it. It becomes over-used and, despite its validity, it becomes devalued. Such is the fate of Thomas Kuhn’s idea of the Paradigm Shift.

How many times in your life have you noticed that, somehow, there has been a substantial change in the way you – and others around you – think about something important? It seems to happen more and more often. Is this a real effect or what getting older feels like?

Or is it just because we have a label for these changes? We call them paradigm shifts. In the 1980s we might have called them quantum leaps, with even less justification. No, they are just changes.

So, what then is a paradigm shift, and how do they come about?

The Origins of Paradigm Shift?

In 1962, philosopher Thomas Kuhn set out his theory for how new scientific theories supplant those that come before. He envisioned radical changes in our conception of the physical world. And he called them ‘paradigm shifts’.

His book, The Structure of Scientific Revolutions (US|UK) became a surprising best-seller. Because, basically, it was an academic text on the philosophy of science.

When I first encountered it, as a science undergraduate in the 1990s, it was no longer much talked about. But, somehow, in the late 1980s and early 1990s, his terminology caught on. It became frequently-used corporate-speak jargon and a staple of the ever-popular game of buzzword bingo, alongside blue-sky thinking and synergy.

What is a Paradigm Shift?

A paradigm shift is a fundamental change in our understanding, approach, or underlying assumptions. But I cannot emphasise the word ‘fundamental’ enough. It’s not just the latest new product, as marketing professionals would too-often have us believe.

In the scientific method, Kuhn reminded us, science normally proceeds by refining theories and models as the result of new experimental evidence. Or of creating new models that we can test with novel experiments.

But, sometimes, we discover a wholly new phenomenon, which demands a substantial re-think. More often, though, revolutions come about because someone develops a whole new way of thinking about our world, as Einstein and Darwin did. Where the evidence supports this and, crucially, where no counter-evidence emerges, scientists will start to adopt this new framework. When a critical mass of opinion has changed, we have a paradigm shift.

So, a paradigm is a shared set of understandings, conceptions, interpretations, and beliefs. They are held in common by a significantly large community. It is a core way of thinking about some aspect of our world, or experience. And a paradigm shift is when a big chunk of that community swaps their old conceptions for new ones.

How to Create a Paradigm Shift

In science, paradigm shifts happen as the outcome of a four-stage process.

Familiar science seems to work well, accounting for the vast majority of phenomena and allowing applied scientists and engineers to make predictions and harness their understanding. Outside of science, we see a current state of affairs that people understand well, and in which parts of society and commerce thrive.

In the science community, some new research opens up a startling insight. This may be a single, transformative theoretical insight, a startling empirical observation, or the accumulation of experimental findings that do not fit the prevailing paradigm. In society, it may be a political shift like the emergence of Communism in the 1910s, Fascism in the 1930s, or (who knows) Populism in the 2010s. Perhaps it is a new technology like the personal computer, internet, or electric vehicle. Or, maybe it’s a new way of doing things – that works – like a production line, or a National Health Service.

Stage 3: People take it up

Whatever the change in thinking, people (scientists) must see it as an improvement, and adopt it. In science, each new paradigm must have superior explanatory and predictive power, making it better than the last. In society and commerce, the concept of necessary improvement is debatable. Just because a population (or significant portion) adopts Fascism, this doesn’t make it a better social and political system than its predecessor.

After the scientific revolution comes a period of stability. The new paradigm prevails in our thinking and followers adopt and develop the new approach. Now, this is what appears in textbooks, and new students only learn of the old paradigm as a historical context. The same is true in society. We get used to the new way of doing things. The older generation may still cleave to the old ways, but they become fewer and less vocal in number.

What is Your experience of Paradigm Shifts?