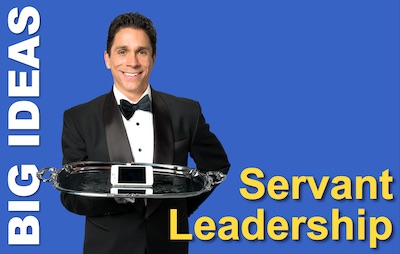 Servant Leadership is one of my personal favourite Big Ideas in the field of management and leadership. It’s been a discipline to push it this far back in our series of Big Ideas.

And we did cover Servant Leadership within our Management Thinkers series. The article on Robert Greenleaf describes the genesis of the idea.

So, in this article, I want to discuss the idea of Servant Leadership in the way I understand it, and introduce a second voice to Greenleaf’s: that of Max De Pree*.

The Origins of Servant Leadership

We’ve written thoroughly about Robert Greenleaf and the origins of his idea of Servant Leadership in an earlier article. So I shall not recap that, except to summarise greatly by saying that Greenleaf got the idea from his interpretation of the writing of German novelist, Herman Hesse.

Please, do take a look at that article. It is like a Part 1 to this one.

But we’ll move on and look at what Servant Leadership is, in practical terms.

Greenleaf’s conception of Servant Leadership is a moral one. We have a responsibility to help the people we lead to grow and develop. So, we must serve them.

For me, this is an idea of leader as a steward of the organisation and its assets (including its people). And that creates the duty of care that is the driver for a leader serving their people.

The Servant Leader as Lightning Rod

For people to thrive in an organisation, we need to navigate a host of obstacles and challenges that the organisation – and life – throw at us. The metaphor I like is that of lightning bolts. They randomly appear from the sky to disrupt our work. While they are common in stormy periods, they can also come out of the blue, from a clear sky. We don’t know when. Lightning can be little more than a harmless distraction. But, sometimes, it can strike with a massively destructive force.

The role of a Servant Leader is to act as a lightning rod: to attract the bolts and deflect them harmlessly.

Max De Pree was one son of DJ De Pree, the founder of Herman Miller, a US office furniture business. Max and his brother followed their father into the business. When Max De Pree stepped down as CEO in 1987, he published his best-selling book, ‘Leadership is Art’ (US|UK).

This, and the books that followed it, set out his approach to leadership, which is very much a vision of a leader as a servant:

‘the leader is the “servant” of his followers in that he removes the obstacles that prevent them from doing their jobs.’

De Pree goes on to say:

‘In short, the true leader enables his or her followers to realize their full potential.’

How to Practise Servant Leadership

Servant Leadership is a behavioural model of leadership. This means that it is evident from a set of behaviours – albeit these are driven by a narrow set of attitudes and beliefs. If you share the attitude that, as a leader, your role is to serve your people and your organisation, what are some of the behaviours to cultivate?

‘The first responsibility of a leader is to define reality. The last is to say thank you. In between the two, the leader must become a servant and a debtor. That sums up the progress of an artful leader.’

What is Your experience of Servant Leadership?

* By the way, Max de Pree, Max De Pree, or Max DePree? We choose Max De Pree because that is the orthography used in the biography on the Herman Miller website. This is the company that his father founded and where he served as CEO for 7 years. Some book jackets use DePree.