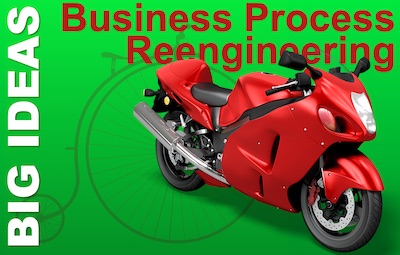 Is Business Process Reengineering (BPR) a Big Idea whose time has passed? An historical footnote for managers to be aware of; but of little use?

Or will we still have a use for the ideas of Business Process Reengineering in the 2020s?

That’s the question I will tackle in this article.

Why Did we Need Business Process Reengineering?

Back in the 1980s, it wasn’t unusual for an application for a passport to take weeks. Or a consumer credit agreement could take days to process. Evrything had to move from one expert to another – often in the form of hand-written paper records.

The job itself was simple. But the transit times from department to department turned an hour of work into a week’s round trip.

As new competitors started with a clean sheet, they could design processes that were faster, less costly, and more reliable. Big corporations were starting to lose business.

If only the big corporations could speed up what they did. But, who was to blame? Was it the credit department, the sales team, finance, risk management?

Yes… and no. It was all of them. But no one was at fault. It was the fact that each worked in its own silo that meant tasks had to hand-off from one to another. These silos went by a myriad of other metaphors too, like smokestacks and stovepipes.

A new approach was needed, and small tweaks to the process weren’t going to cut it.

What is Business Process Reengineering?

Business Process Reengineering is an approach to improving efficiency. But not, however, in an incremental, Kaizen sort of a way. It makes broad sweeps across the organisation to create a giant shift in the way we do things. One of the foundational papers, by Michael Hammer, was called:

The book that popularised BPR came out in 1993 and was by Hammer and James Champy. In ‘Reengineering the Corporation’ (US|UK), they defined Business Process Reengineering as:

‘the fundamental rethinking and radical redesign of business processes to achieve dramatic improvements in critical, contemporary measures of performance, such as cost, quality, service and speed’

How to Do BPR

Is Business Process reengineering still a Relevant Approach for the 2020s

Yes, because the option for radical transformation of grossly inadequate systems and processes must always remain open to organisations. But incrementalism and incremental improvement – in the form of both Kaizen and Agile approaches to change – are the current paradigm.

Also, when huge corporations like IBM, General Motors, and Proctor and Gamble were undertaking mammoth BPR programmes in the late 1990s, they had a lot of catching up to do with new entrants and foreign competitors. The new generation of mega corporations are built on technology and speed.

But that isn’t to say that today’s younger corporations won’t need to make radical changes in 5 to 10 years, to compete with tomorrow’s infant organisations. But what I think will be different is the way such programmes of change take place. The first wave of BPR was brutal, in terms of downsizing staff rosters and how they treated the survivors.

The so-called second wave of BPR, at the turn of the century, was starting to be kinder and more respectful of staff and their deep knowledge. I think any future Business Process Reengineering programmes will:

What is Your experience of BPR?