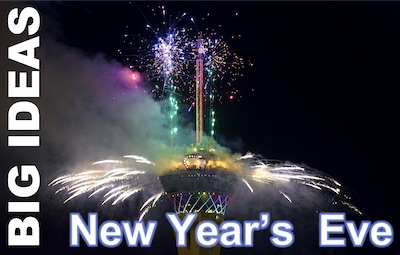 But it’s a Big Idea. We know that because, every New Year’s Eve, millions of people gather in groups from 3 to 300,000 – maybe even more. And they spend billions of dollars, Pounds, Euros, and Yen on food, drink, parties, and fireworks.

New Year’s Eve has become one of – maybe ‘the’ – biggest secular celebrations in the calendar. But, is there any more to it than that?

Why Do We Have a New Year’s Eve?

If we have a year, it must have a start. And therefore, being cyclical, it must also have a last day – the end of the old year (some countries do call it ‘Old Year’s Day’) and eve of the new.

But it’s interesting to note that, astronomical realities aside, the cyclical view of life was not a given in the ancient world. From a purely Western perspective (because that’s the culture I understand), the cyclical calendar of seasons and new years is a Northern European overlay on the Middle Eastern religions of Judaism and Christianity.

Islam and Judaism still use lunar calendars for religious observance. But it was when the post-Judaic Middle eastern religion of Christianity spread to Europe that it started to build in a solar cycle into its ritual and calendar. That’s why we have the (seemingly absurdly) complex ‘computus’ calculation of the date of Easter, which relies on a knowledge of the dates of the Spring Equinox (a solar phenomenon) and full moon (a lunar phenomenon):

So, we have New Year’s Eve because of northern European food.

So, to be absolutely clear, when we talk of New Year’s Eve, what we mean is:

The last day of the year in the Gregorian Calendar

And, because we live in a global economy, almost every country has adopted a calendar promoted by a 16th-century Italian lawyer and cleric.

What Happens on New Year’s Eve?

Wikipedia editors are quite something. The Wikipedia New Year’s Eve page describes what happens in 76 specific countries. ‘Partying and fireworks’ seems to be a good summary, with a measure of religious observance.

That said, the only explicit link to any religious event seems to be in the Roman Catholic church, where 31 December it is a high holy day that celebrates the Virgin Mary. Adherents are expected to attend Mass and not work.

Saudi Arabia, as a strictly Islamic state, does not officially use the Gregorian calendar. There is a religious ban on any public celebrations linked to it – including New Year. So, you can hold a private celebration, but commercial and public recognition of the Gregorian New Year is forbidden and punishable as a crime.

Yup, maybe you do. Best forget it quickly though. I’m sure many of the cast are trying to.

What is Your experience of New Year’s Eve?

We’d love to hear your experiences, but please keep them family-friendly. Do leave them in the comments below, and when the wine wears off, we’ll take a look.

Nope. There is no New Year’s Eve Pocketbook, full of tips, techniques, and tools to celebrate the New Year in style.

You just have to figure it out for yourself.

Happy New Year for 2020, from all of us at Management Pocketbooks.