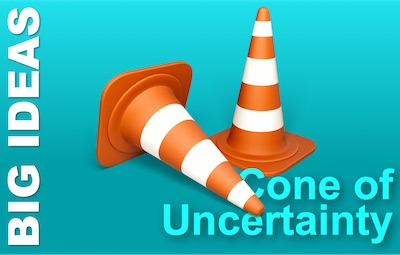 The Cone of Uncertainty is a concept from the world of Project Management. But, as an idea, it is so compellingly simple and so widely applicable, that it deserves a place of its own in our Big Ideas series.

So, in this article, we’ll take a look at what the cone of uncertainty is, and how it makes a helpful mental model in many contexts.

What is the Cone of Uncertainty?

The Cone of Uncertainty is a simple graphical representation of a basic truth. When you start planning something new, you don’t know much for certain. The possible range of outcomes for any variable is wide. 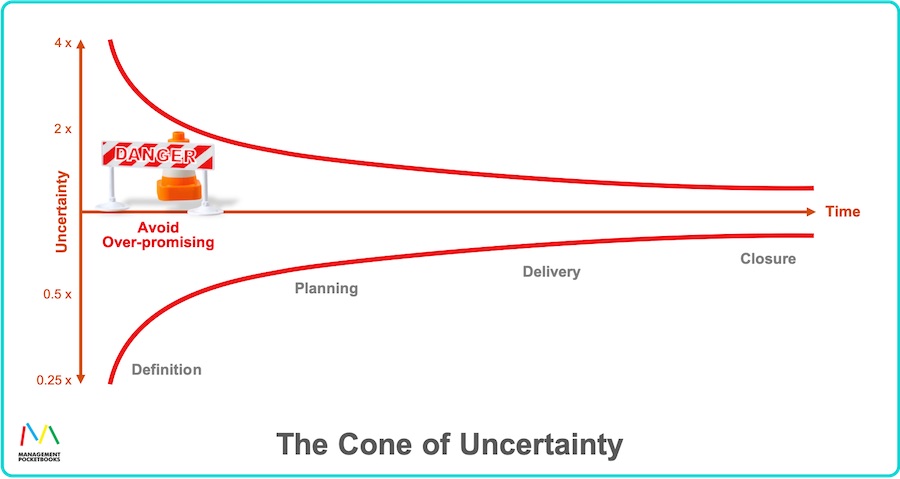 As your endeavour progresses, you learn more. You also make decisions and commit resources. Those choices restrict options and your greater knowledge gives more certainty. The scope for different outcomes reduces, and the neck of our graphical cone gets thinner.

At the very end of your project, you have a certain outcome. Now the cone reaches its point.

The Cone of Uncertainty works in both directions. For predictions of the future, uncertainty increases the further forward you try to predict. Now is certain; tomorrow less so. Next week is little more than a range of possibilities. The iconic representation of this is the predicted track of hurricanes and typhoons. We know where the centre is today, and we can project its path forward. But there is uncertainty. So, for each day that we project out, the range of possible paths increases exponentially, as errors in our estimates compound. So, we see the familiar charts. 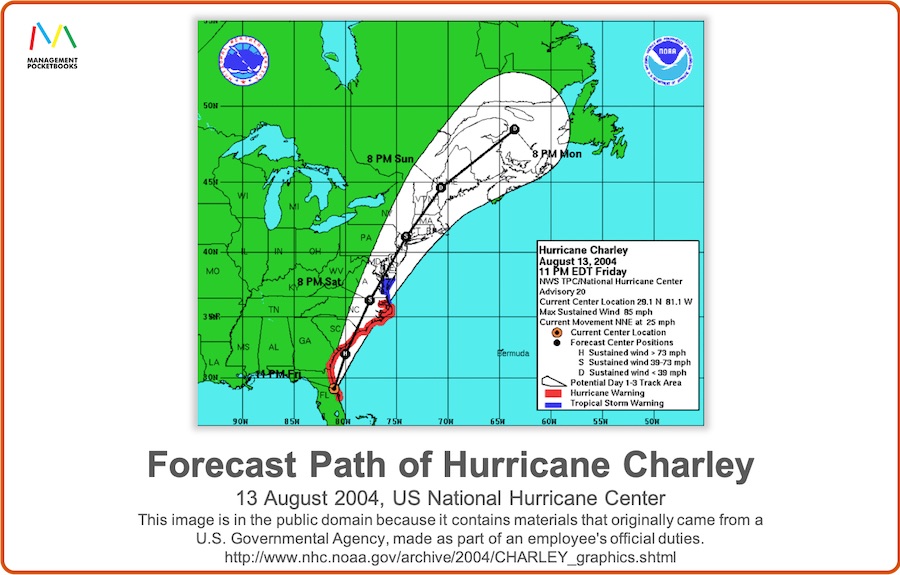 The primary lesson of the Cone of Uncertainty is to not over-promise near the start of any project or other unfamiliar endeavour. Only as you resolve details will your confidence in outcomes increase.

But managing the cone of uncertainty needs to be an active enterprise. Merely getting on and hoping may result in some increase in certainty, but not as much as you could achieve. The principle means of managing down uncertainty and managing up confidence are:

Notice that more estimating is not among these items. Often, additional work on estimation may make small improvements in the estimate. But your confidence level will not increase substantially. For that, you need facts. And that means real reductions in the number of possibilities.

Where the Cone of Uncertainty Applies

We seem to be living in a time of unprecedented pace of change, whether in the social, political, technological, or commercial arenas. And the cone of uncertainty applies in all of them.

The Origins of the Cone of Uncertainty

The Cone of Uncertainty originated in the engineering domain. It was an illustration in the 1958 paper, ‘Accuracy Considerations for Capital Cost Estimation’, Industrial & Engineering Chemistry, by Carl Bauman.  Barry Boehm picked up the idea in the context of software engineering in 1981, and apparently referred to the idea as the ‘Funnel Curve’. It was in 1997 that Steve McConnel used the term Cone of Uncertainty for the concept.

It may be possible to draw an empirical graph of the cone of uncertainty. But the real value of the idea is as a mental model to remind us of one simple fact. Estimates and expectations are vague at the start of a project, and only become more precise as we do the work. If you remember this, then you will be able to properly challenge any estimates that are presented without confidence limits, or with ranges that are too narrow, and portray more certainty than is warranted by the situation.

And that single capability will serve you tremendously well.

What is Your experience of the Cone of Uncertainty?

The Project Management Pocketbook has just gone into a new (3rd ) edition. It’s one of our best sellers. It is full of tips, techniques, and tools for effective task management.