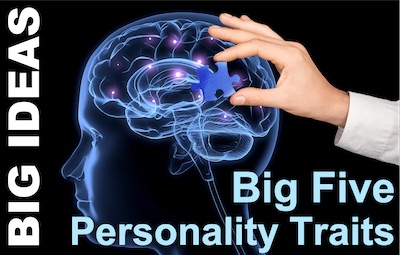 The quest to understand human personalities has been going on for 3,000 years, or more. The Big Five Personality Traits are just the latest in a long line of models that take us towards that understanding.

And, it would be as absurd to think that the Big Five Personality Traits will be the last word on the matter as it would have been to stick with the four humours. But perhaps what the centuries of scientific development, and acres of statistical analysis, can assure us of is that we are honing that understanding.

How like the Big Five our 22nd Century model will be, we cannot know. But, for now, the best representation we have, of the fundamentals of human psychology, are the big Five Personality Traits. So, what are they?

Why a ‘Big Five’ Personality Traits?

Humans have been trying to understand one another for as long as we have records. The great classical works of fiction, like the Odyssey and Illiad, Ramayana and Bhagavadgita, or the Old and New Testaments attest to our struggle to discern motivations and behaviours. And later fiction from Chaucer and Boccaccio, through Shakespeare and Moliere, to Dickens and Henry James has continued the search.

Science has been at it too. The ancient and mediaeval philosophers gave us the four humours:

The English language is rich, almost beyond comprehension. If you look in the biggest dictionaries, you’ll find (so my old Psych textbook tells me) around 18,000 words that describe characteristics of how we behave – elements of personality.

So, the answer to what personality traits someone displays gets really, really tricky.

In the 1930s, Gordon Allport worked on cutting this down by eliminating out-of-use (and therefore likely superfluous) words, and synonyms that really duplicate the same idea. He still ended up with over 4,500 to group into clusters.

In the late 1950s, Raymond Cattell further refined the list to 200 terms and then did some testing and analysis that lies outside of our scope. But he ended up with 16 Personality Factors. Indeed, the 16PF test is still in use.

Around the same time, Hans Eysenck took a more radical approach and boiled ‘normal’ psychology down to just two factors. He added a third, psychoticism, to account for abnormal psychology, but we’ll gloss over that one. He showed that his two factors could account for all four humours with a classic ‘two-box model’. 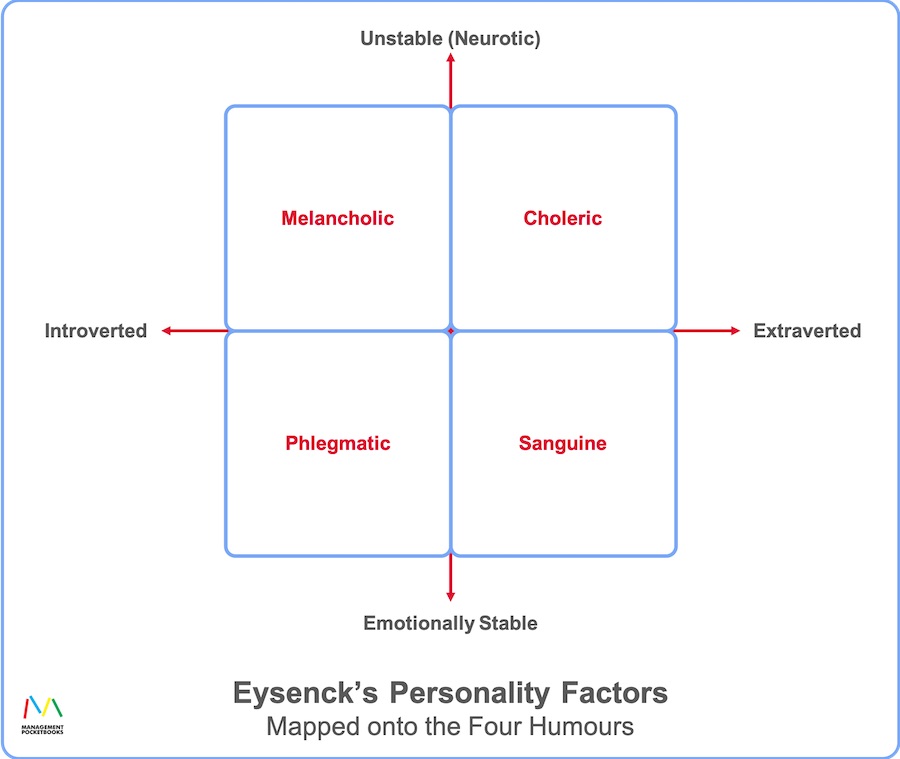 Somewhere between an unwieldy 16 personality factors and a perhaps reductionist two is a happy medium. And, hopefully, one that gets a good balance of simplicity and explanatory and predictive power. Ideally, we can support it with a load of evidence too.

And so it seems.

A range of different measuring techniques has led a number of researchers to a five-factor model (FFM). And these five personality traits match a detailed analysis of Allport’s larger list. These are the Big Five Personality Traits. Their validity is underpinned by four characteristics;

What are the Big Five Personality Factors?

There are plenty of acronyms to remember them – of which the worst I have seen is NEOAC (possibly a logical sequence in someone’s mind) and the best are CANOE or (my own favourite) OCEAN.

Let’s look at the Big Five Personality Traits in turn…

This is about openness to new experience and its opposite; a reticence to change and explore new things.

At one extreme is a curiosity and originality – even a daring to try out new experiences. Politically, this manifests in a more liberal outlook.

At the other extreme, we see pragmatism and conventional approaches that politically manifest as conservatism.

Conscientiousness is about the discipline to do what we undertake to do. It is careful, reliable, and dutiful. A liking for order and attention to detail go along with conscientiousness.

Its opposite is unreliable, careless, and even negligent.

Extraverts are sociable and get their energy from being with other people. They tend to be talkative, enthusiastic, and spontaneous.

At the other extreme, introverts are more quiet and retiring; often appearing to be reticent or even inhibited. They prefer their own company and find being in groups a drain on their energy.

People high on the agreeableness scale tend to be easy-going, generous, and kind-hearted. They come across as friendly, likable, and tactful, and so find persuasion easy.

More disagreeable people tend to focus more on their own needs and so can appear irritable, selfish, or even ruthless.

This trait is about emotional stability. Low neuroticism reflects an emotionally stable personality that comes across as calm and secure. People low on neuroticism tend to be resilient to life’s setbacks.

High neuroticism, or emotional instability, manifests as insecurity and worrying; a feeling of vulnerability, even fragility. We often see extreme moods of frustration, anger, anxiety, or depression. Little things easily upset or irritate people high on this scale.