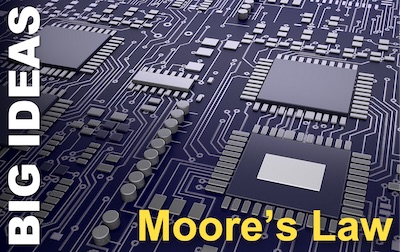 Faster, better, cheaper. Isn’t that the goal of every manufacturing process? It sounds hubristic to even try but, thanks to Moore’s Law, that’s what the semi-conductor industry has achieved year after year – for nearly 60 years.

And it’s Moore’s law that predicted that trend towards smaller, faster, cheaper, and more energy-efficient computing.

Indeed, chip manufacturer Intel calculates that, if the automobile industry had performed as well as Moore’s Law, we’d now be driving cars that:

But there are clouds on the horizon. Inevitably, for physical reasons, Moore’s law must reach an end. But strangely, this makes it a good time to look at it.

What is Moore’s Law?

In 1965, the co-founder of Intel, Gordon Moore, observed that the number of transistors per unit area on a microchip doubled every year. He later (1975) revised it to every two years, and predicted that the trend would continue. This has become known, colloquially, as Moore’s Law.

This is an observation of the rate of scientific and technological progress, rather than a law of nature. But, with some modification, it held up from the mid-1960s to the mid-20-teens.

Significantly, Moore’s Law produced a forecast that the trend would continue. And it was on this trend that companies like Intel were able to base their planning assumptions. This allowed the fast-growing computer and consumer electronics industry to co-ordinate their planning for many years. It formed a heartbeat of new technology releases.

The impact of doubling in a fixed period (one year, two years, or 18 months) is exponential growth, which leads to the awesome power of compounding. Intel gives the following figures for the microchip industry. When applied to the automobile industry they give the astonishing results I quoted in the introduction.

‘Hang on, My Computer’s Not Much Faster Today than the One I Had 10 Years ago’

Yes, it is. But it often doesn’t appear that way, because the software you are running is far more demanding. It does more and it does it in a more graphically appealing way. All that takes up a lot of the extra computing power.

Computers don’t ‘appear’ to have got twice as fast every two years, largely because the software we run on them gets more demanding – meaning it can do more, and does more in the background. Many of the features that use up extra computing power are embellishments, rather than core to our functional needs. This is what some people mean when they speak of ‘bloatware’ – software that is bloated with features and effects we don’t really need.

New, more demanding software slows down your older computer. So you feel it is failing you and therefore upgrade. Moore’s Law drives obsolescence and continuing replacement cycles that fund the research which drives Moore’s Law. It’s an Ouroboros cycle that powers itself.

The physical universe does have limits. And Moore himself stated that there would be an end to Moore’s Law. A few years ago (2015), Intel suggested silicon transistors would only keep shrinking for another five years. There is a physical limit – which has nothing to do with R&D. Using current approaches, there will come a time when the physics means that we can’t disperse heat fast enough, from a tiny volume.

We’ve just entered the 2020s. Certainly sometime this decade, Moore’s Law will end – likely nearer the start than the end.

What if a wholly new technology were available to reboot Moore’s Law? To reset it and start it again for another few years.

There are certainly candidates. And, if you are interested in the technology (or the undoubted investment opportunities*), you can research things like:

* Please Note: I have absolutely ZERO idea how good any such investments would be and neither am I (nor Management Pocketbooks) qualified to offer any investment advice.  Do your own research, take proper advice, and invest at your own risk. Nothing in this article can nor should be taken as investment advice. If I could foresee the future, do you think I’d be working for a living?

This led Neven to suggest that quantum computing would match and then overtake the capabilities of ‘traditional’ transistor-based computers in 2019. This event is known as ‘Quantum Supremacy’.

And guess what? Google’s quantum computing team announced just that, in autumn 2019. Tada.

Now, there are many computer scientists in that field who dispute the claim and still more who want more evidence. But the fact is, we’re close, and quantum computing is reaching the early stages of being a real solution to some vastly complex computational needs.

Next time you feel the need to buy the next generation of your mobile phone, or a new tablet device, or an upgrade to your computer, remember what’s fuelling that need. It’s the constant research and development that refines the capabilities of our high tech devices.

That research is miniaturising the size, price, and energy demands to such an extent that we’ll soon see computationally sophisticated components in almost every electrical device. And these will also have communications capabilities to connect with one another. This is the so-called ‘Internet of Things’ or IoT.

Before long, every machine will be smarter than you are. And they’ll all be talking to each other – maybe about you.

So, remember this. Whenever a cash machine dispenses money to you, or a car park barrier accepts your ticket and opens up, or when the petrol pump fills your car and takes payment from your contactless payment device… Always say thank you. Courtesy never costs you anything, and the machines will never forget.