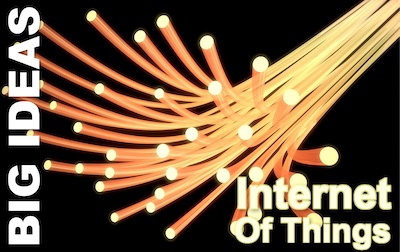 Like many big ideas, the Internet of Things operates at many levels. It may sound frighteningly complex to you. But in fact, the core of the idea is very simple.

But, underlying a simple concept, the technology that makes the Internet of Things (IOT) possible is fiendishly complex. Indeed, it is really the convergence of many advanced technologies.

We shall not be taking a dive into the technology (you may be glad to hear). However, any well-informed manager needs to understand the big picture of:

So, in this article, we’ll give you your primer on the Internet of Things.

What is The Internet of Things (IOT)?

Anything that has power can have a microchip inside it. And Moore’s law has meant that, for many years, the size of these chips has been diminishing, while the power to do stuff has been increasing. So too has the cost been reducing and also the power demands.

So we can now embed a powerful computing capability within even small things. That chip can:

Now things can become ‘smart’. And we can counterpose them against ‘dumb’ things that just do the same thing, regardless of what demands we place on them, or the changes in their environment.

So, the Internet of Things is a network of smart devices, exchanging data so the actions they carry out integrate with one another. This network can also connect to the wider internet. In this way, the IOT is a bridge between the physical and digital worlds. Day-to-day, it connects our lives in new and subtle ways.

The Constituent Technologies within Smart Objects

Smart objects need a bewildering array of technologies to sense their environment, adapt to it, and communicate with the rest of the Internet of Things. These include:

If every smart object can communicate with the wider Internet of Things, it needs an address, so that the wider IOT can communicate back. The widely used addressing system was, for many years, IPv4 (Internet Protocol version 4). At the time the US Government’s DARPA research lab developed it, people must have thought that over 4 billion addresses would be more than we could ever need for the computers connected to the internet. After all, that was more than one for every family!

This will never work for an internet of Things in which dozens of smart objects would occupy every home, and hundreds and thousands would fill every commercial building, factory, and public space. In particular, it was the development of a new address system for internet-connected objects that was necessary for the Internet of Things to become possible.

I wonder when people will start to realise… Not enough addresses!

What can the Internet of Things do?

The Internet of Things has the capacity to make everything more efficient, in terms of:

By receiving data from the environment and coordinating with other things, equipment can respond more quickly and precisely to the demands upon it.

Uses for the Internet of Things

There are numerous consumer uses, in smart:

Homes: heating, lighting, fridges that order food, curtains that draw themselves at evening and daybreak

Cars that: report faults, can be tracked for security, and call the emergency services after an accident

Personal assistants: like the ubiquitous Alexa, Cortana, Siri, and their friends

Increasingly factories are filling with smart machines. Each one is a reusable module that can communicate with others, to integrate into a larger whole. They can talk to supply chains to ensure delivery of components. And with warehousing and outbound logistics. And how do they know what to manufacture. Because the smart devices on the retailers’ shelves are warning them that diminishing stock levels need replenishing.

And there are Social Uses for the Internet of Things

What is the Future for the Internet of Things?

How Did We Get Here?

To understand the future, we need to understand the past. I’ve read that the Internet of Things started with a Coca Cola vending machine that was connected to the internet. It could report stock levels and temperatures.

Wikipedia reports that the term ‘Internet of Things’ probably originated with Kevin Ashton in 1999. Then, he worked at Procter & Gamble, later moving to MIT.

But what made its growth possible was the development of low-cost radio-frequency identification (RFID) tags.

So, by 2010, there were more things connected to the internet than people via ‘traditional’ computers.

The Growth of the Internet of Things

As you might expect with such big and diverse numbers of things, data is patchy and variable. The numbers different wherever you look. But these (while probably not definitive, give an indication of the growth of the Internet of Things.

By the end of:

I imagine that, at some point, anything that can be connected to the internet will be part of the Internet of Things.

What are the Concerns about the Internet of Things?

The exponential growth of connected stuff has, of course, triggered concerns. Everything from Eric Drexlers’s concerns of Grey Goo to Matrix and Terminator dystopias of machine worlds fighting us for supremacy.

Some of the more mundane (and very real) concerns include:

People often say that the Internet of Things can connect ‘anything that has an on/off switch’. Maybe one day they will have no switch – they will always be on.

What is Your Experience of or Opinion about the Internet of Things?